Rail Traffic: "Moving lower, with no End in Sight"?

A few months ago, I noticed something that seemed strangely discordant about our "Great Depression 2": consumers were refusing to stay dead, but instead showed signs of - at least partially - rising from the grave. But a look at truck traffic (which is only posted monthly) and rail traffic (which is updated weekly) showed a continued year-over-year slide.
I took a further look because one very prominent blogger has recently alluded to rail traffic several times, most recently saying it was "horrible" and "13-week moving averages are still moving lower, with no apparent end in sight" So, what's going on? Does rail traffic in particular mean the recession is continuing to plunge deeper into the abyss, or are we hitting bottom?
Here is the group of charts, courtesy of Railfax, showing the 13-week moving average of year-over-year rail traffic: 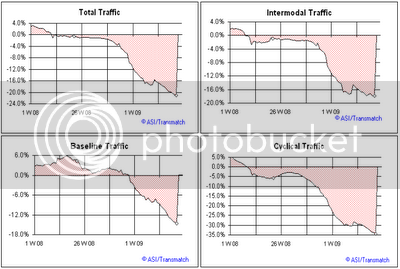 Note they show that the average continues to plunge. But, keep in mind that this 13 week average compares data from mid-March to mid-June 2009, and compares that with mid-March to mid-June 2008 -- so it is truly a very lagging indicator, in essence telling us that the period of time leading up to end of April 2009 was far worse than that period leading up to the end of April 2008. Well, duh! For confirmation, note that the year-over-year averages above didn't turn negative until February 2008 -- two months after the recession began.
But now let's look at the same site's data showing the 4-week average of raw current data, both for 2008 and 2009. These four week averages tell a different story. The four week moving averages not only tell us that 2009 is worse than 2008, they also tell us that 2009,after an initial bounce, has been flat in the second quarter, in comparison with a rise in traffic in spring 2008. In other words, the year-over-year comparison isn't declining because traffic in 2009 is continuing to slide further, but rather because an increase in traffic from spring 2008 isn't being repeated: 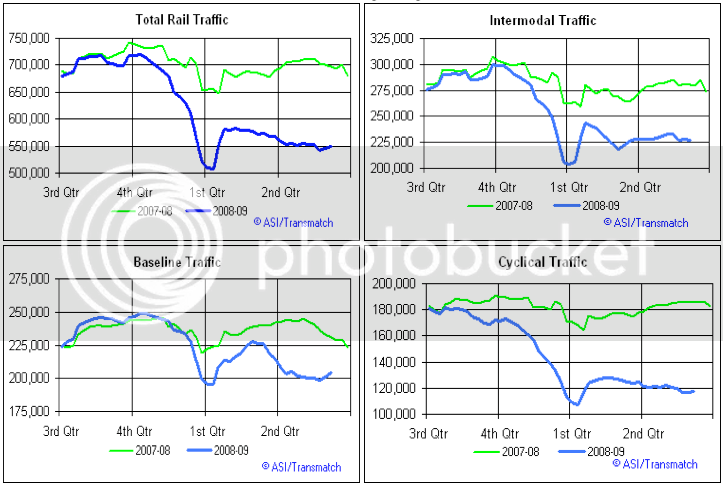 Additionally, note that (1) this average did peak in October 2007, several months before the onset of the recession; and (2) the most current weeks of data in 3 of the four 4 week graphs show a small upturn in 2009 traffic, compared with a decline in traffic in the same period in 2008. So is trail traffic generally getting worse, or stabilizing?
Rail traffic is moving goods to market. To properly interpret the data, we should compare with retail sales; in other words, how well did the goods moved to market sell? And this solves our mystery. From the very beginning of the recession onward, retail sales began to turn down:

Despite this, business inventories continued to rise:

Once the Wall Street/housing depression metasticised to Main Street in late 2008, retail sales plunged. All of those increased goods being hauled by railroads in spring 2008 failed to sell, leaving retailers with a huge supply of unsold inventory on their hands, as evidenced by the inventory to sales ratio:

Because inventories, as per the above graph, tend to lag sales, after the plunge businesses cut back dramatically on their incoming inventory. That overhand of inventory has only partially been worked through. Hence railroads continue to haul fewer goods to market. But as shown in the retail sales graph above, retail sales have generally stabilized at a level about 10% less than before the recession. Even automobile sales appear to have stabilized albeit at a rate about just below 10 million vehicles a year. So if incoming inventory continues to plummet as retail sales stabilize, the inventory to sales ratio could decline towards normalcy just as quickly as it rose. When that happens, railroad loads will start to increase.
Look again at the 4 week averages above, where I pointed out the small upturn in the last few weeks of data. It is too soon to say that is a trend, but if it is , the lagging indicator of the 13 week year-over-year average cited by that prominent blogger will abruptly begin to rise - a couple of months from now.
To his credit, that other prominent blogger concludes that "The good news is a bottom might be coming." But one of things I constantly harp on is that to discuss where the economy will be in the future, one needs to look at leading economic indicators, and analyze them. The worst way to discuss where the economy is going is simply to project coincident - or worse, lagging - economic indicators into the future. In projecting that "13-week moving averages [year-over-year railcar loads ] are still moving lower, with no apparent end in sight", our prominent blogger has done exactly that.
Posted by New Deal democrat at 10:00:00 AM