We're Nowhere Near a Bottom in Housing

You'd think I'd get tired of writing that headline. But not with the current information we have on the market. Let's start with the charts (courtesy of Calculated Risk) 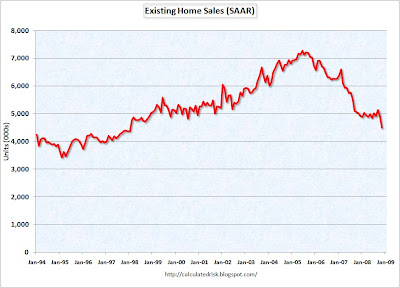 Sales were pretty even for most of 2008. But they dropped big time last month. Some of that might be end of the year backing away -- no one wants to buy a house in December unless they absolutely have to. But it's also important to remember there has been no good news for awhile now. The US is formally in a recession; the financial sector is tightening credit standards. The stock market is down 40% for the year. It's a pretty bleak time. 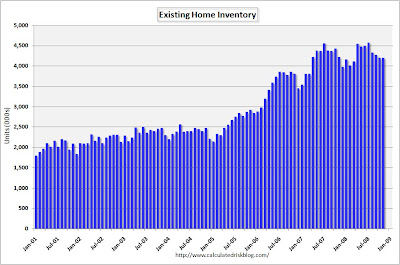 Notice total homes available for sale has fluctuated between 4 and 4.5 million for the last year and a half. In other words -- we haven't made a dent in the homes on the market. There are several reasons for this. Sales were dropping for most of 2007, letting inventory build. While sales evened out in 2008 they did so at a much slower pace than 2007, thereby allowing inventory to continue to build. Then you have a rash of foreclosures adding to inventory for 2008 in addition to a credit crunch which is restricting borrowers. Bottom line: this is not an environment where inventory gets cleared. 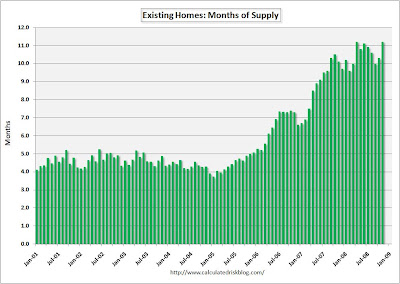 The months of inventory available has been floating around 9.5 to 11 months for the last year and a half. Simply put -- inventory isn't moving.

And now it appears people are waiting for lower prices before they commit:

As the ads say, "more than just a privileged few" can call the brand-new Opera Tower home.

Thanks to the tattered housing market, renters are welcome at this marbled luxury condo soaring over Biscayne Bay — billed as the "jewel of Miami's Cultural District."

Lease-to-own programs are also cropping up in other places such as New York — specifically, in some overbuilt parts of Brooklyn.

Homebuilder Toll Bros. (TOL) is pushing rent-to-own units in its new luxury condo tower on the Brooklyn waterfront in the borough's trendy Williamsburg section, an area with a glut of new projects.

In economically hard-hit Lansing, Mich., the Gillespie Group recently offered several lease-to-own units in a new condo it built in the Stadium District.

"In mid-September we seemed to have just hit a wall as far as customers' desire (or ability) to close or buy," said President Pat Gillespie.

But just one person has signed a contract. So Gillespie plans to push straight rentals after the holidays.

"People think prices are going to continue dropping so they're renting and waiting out the market," said Steve Anderson, an agent with Carson Realty Group in Miami Beach.

People are getting smart and builders are getting desperate. Builders are treading water, trying to hold-on the best they can through one of the worst markets in generations. Buyers are getting hip, realizing they can wait for awhile longer before they commit.
Posted by Unknown at 9:30:00 AM