The dollar broke out of a trading range. The dollar has been meandering between 72 and 74 since May. This is a standard trading range which happens when traders are waiting for firm news to send the security in one direction or the other. This week we had news from central banks around the world.

The dollar was higher against most major currencies Thursday after the Bank of England and the European Central Bank decided to leave key interest rates unchanged.

The European Central Bank left its key interest rate unchanged at 4.25 percent Thursday, while the Bank of England kept interest rates steady at 5 percent for the fourth month running, as they both grapple with slowing economic growth as well as rising inflation.

In other words, this was less about the Fed's policy and more about the ECB keeping rates stable with the possibility of lowering later in the year because of slower growth.

Also on the daily chart, notice the following:

-- Prices are about all the SMAs

-- The shorter SMAs are starting to rise about the longer SMAs

This chart is starting to move into bullish territory. 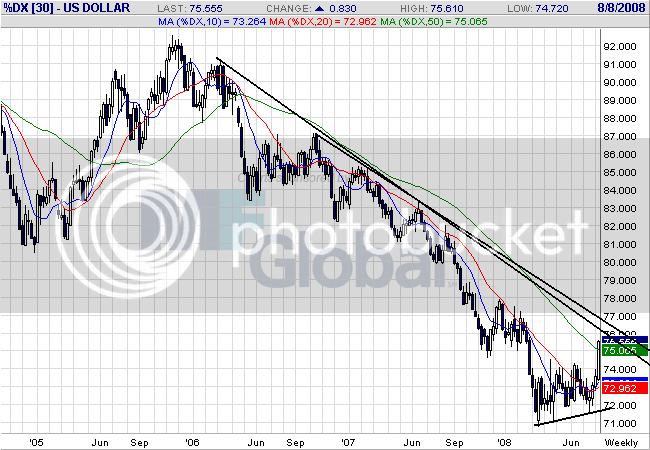 On the longer (weekly chart) notice the following:

-- Prices have moved through all the SMAs

-- There is still a downward trend from the chart with the upside resistance.
Posted by Unknown at 6:35:00 AM