From the MarketBeat Blog of the WSJ:

But in all of 2007 so far, the biggest contributors to the S&P 500’s rally include just one company with a $150 billion market cap or more, AT&T. The megacap advances in April suggest a flight to safety — investors more willing to bet on global conglomerates — while the lack of broader market gains suggests investors are worried about economic growth. Breadth has been negative on four of the past five trading days; only Friday’s massive rally helped more stocks finish higher than lower on the day on the Big Board.


As noted in earlier posts, outperformance of late has been concentrated in megacap stocks. The exchange-traded fund tracking the S&P 100 has outdone those tracking the S&P Mid-Cap 400 and Small-Cap 600, as well as the Russell Microcap index. The largest-cap stocks trail small- and mid-cap names on the year, but have rocketed ahead in the last month, gaining 4.75% compared with the 3.7% in both the Midcap ETF and iShares SmallCap ETF. It may not persist, but it does point to both a flight to safety and indication that those companies have the ability to offset dollar weakness with overseas sales.

Take a look at this chart, which is a comparison of the utilities ETF versus the S&P 500 ETF. 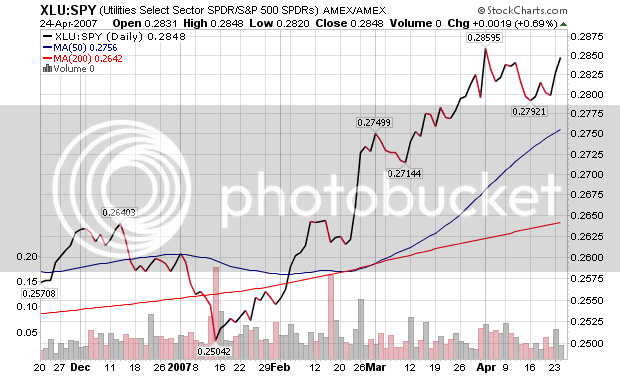 Utilities are clearly moving up in relation to the broader indexes, indicating investors are looking for quality and safety right now.
Posted by Unknown at 4:02:00 PM