The Treasury and the Federal Reserve are throwing trillions of dollars at financial firms to prod them to lend more. But even if those programs succeed, debt-strapped families probably won't want to borrow hand over fist.

This is the key question to ask regarding the credit crisis: once banks are back on their feet, who will take out loans.

Let's start with this:

Consumers are saving more to make up for a 20% drop in the median U.S. home price and a nearly 50% decline in stock prices from their peaks.

As a result of all the debt and drop in two primary assets, households are saving more: 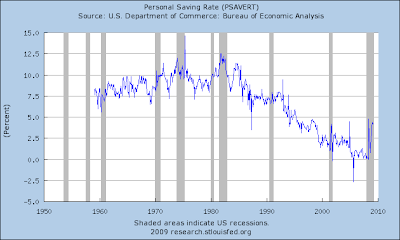 2.) There is meaningful increase in incomes.