The American consumer comes roaring back

This morning's retail sales report marks the demise of one of the two weak areas in the US economy.

Last fall, there was a debate as to whether the decline in gas prices would be a net positive for the US economy, as an unambiguous positive for consumers (the majority view) vs. a negative due to impact on the Oil patch (Doomers!).  Prof. James Hamilton of Econbrowser wrote that the weakness in the Oil patch would be more concentrated and sooner, while the positives would be diffuse and take place over a longer period of time.  That's what has happened.

With this morning's revision, even in April real inflation-adjusted retail sales exceeded their previous November high.  With an additional gain of +1.2% in May, they have blown through the previous high by about 1%, even after inflation is taken into account (May inflation hasn't been reported yet).  The graph below includes the revised data through April (blue), together with the broader measure of real personal consumption expenditures (red): 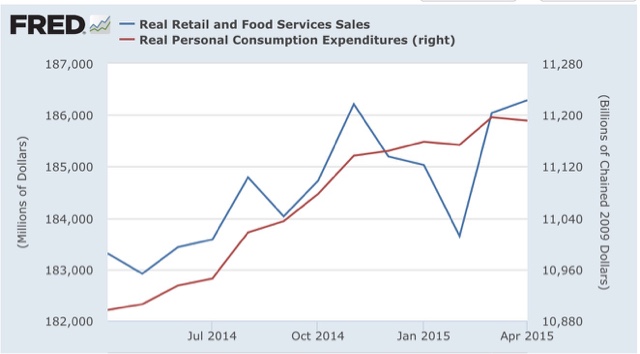 Not only are retail sales and real retail sals at new highs, but it is almost certain that per capita real retail sales also made a new high in May.  This last measure is a pretty reliable long leading indicator, so it suggests the economy will continue to grow at least into the second quarter of next year.

to summarize:
1. there really was a bout of winter weakness due to unusually rough weather.
2. there has also been transitory weakness concentrated in the Oil patch, but as indicated by initial jobless claims, and as of this morning, consumer purchases, have outweighed that weakness.
3. take heart, Doomers!  Industrial production still stinks, due to the overly strong US$.
Posted by New Deal democrat at 8:32:00 AM