So anyway, we've gone from a dry spell where there was barely any data to write about, to a deluge of new information, which means I don't have the time to write posts highlighting all the interesting (well, interesting to a nerd like me) trends!

One by-product of this subdued inflation, caused in large part by somnolent gas prices, is that real, inflation-adjusted wages are starting to rise again.  Here's a graph of average hourly wages on non-supervisory workers adjusted by inflation for the last 10 years: 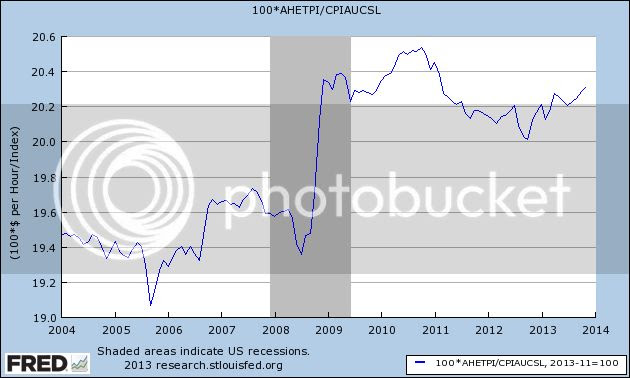 With the loosening of the Oil choke collar in 2013, however, real average wages as of yesterday rose to their highest level since February 2011, nearly 3 years ago.

The trend has turned positive, with YoY real wages rising by about 1%, as shown in the graph below of the YoY% change in real wages: 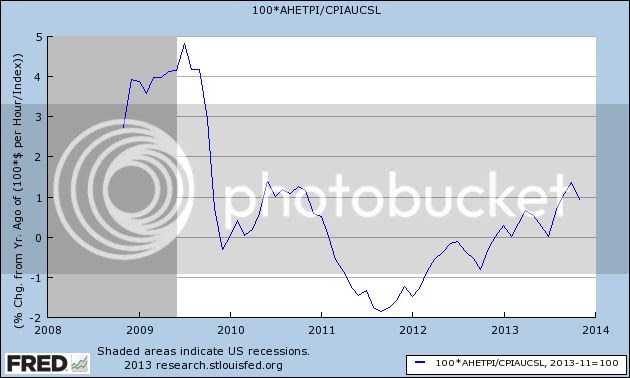 Since YoY real wages are about 1% below their 2010 peak, this means that we could actually establish a new high in average (not necessarily median) real wages for nonsupervisory workers by the end of 2014 - if gas prices remain somnolent.

Not grounds for "Allelulia's," but a welcome trend nevertheless.  One which is going to be overlooked by about 98% of econobloggers because it doesn't fit their worldview.