Remember how the implementation of Obamacare was killing full time jobs? Doomers, both right and left, were sure that full time jobs were evaporating this past summer.

In case you don't, here's an article from August in the McClatchy newspapers:

“Over the last six months, of the net job creation, 97 percent of that is part-time work,” said Keith Hall, a senior researcher at George Mason University’s Mercatus Center. “That is really remarkable.”

Hall is no ordinary academic. He ran the Bureau of Labor Statistics, the agency that puts out the monthly jobs report, from 2008 to 2012. ...

"There's something going on if such a large share of the hiring is part time," Hall said.


This statistic was quickly seized upon by right wing bloggers as definitive proof that Obamacare was a colossal failure.  Here's Ed Morrissey of Hot Air:

The July report only confirms that trend. Only 92,000 full-time jobs were created, while 172,000 part-time jobs got filled (not net numbers).   The only major influence in 2013 that differs from the preceding three years of the recovery is the impending ObamaCare mandate on employers, which the Obama administration will try to postpone for a year.  The data shows that businesses have already begun to react by minimizing their risk and costs through part-time employment, thanks to the perverse incentives set up by the ACA, and that this will continue as long as the mandate exists.

Denialism may be too strong a term. But there seem to be a lot of people arguing that Obamacare has little or nothing to do with the rise in part-time employment. Some deny the rise is even happening, while others are content to deny that Obamacare is the culprit. Admittedly, it takes a little detective work, but if we systematically review the available empirical evidence in an even-handed fashion, the conclusion seems inescapable: Obamacare is accelerating a disturbing trend towards “a nation of part-timers"

Needless to say, Zero Hedge was all over the story.

And left wing Doomers were just as certain of the fact as their right wing counterparts, if for different reasons, with one Daily Kos front-pager going so far as to call the questioning of the trend in a Marketwatch article "ridiculous."

Yours truly debunked these claims at the time, noting that:

... [E]ven though the household numbers are seasonally adjusted, it looks like there is some unaccounted seasonality still left in the numbers. ...[T]here has been a pattern ever since the recession whereby full time jobs ramp up through May, and then decline (or at least decelerate) through August, before rising again. In fact, through August of 2011, full time jobs were actually negative as measured from the first of the year.

So, now that we are at the end of the year, with employment reports through November, has the alleged Obamacare disaster for full-time job creation persisted?  Or has my critique, of unaccounted seasonality, been shown to be true?

Here's the graph of both part-time (blue) and full-time (red) jobs, showing gains or losses since the end of 2012: 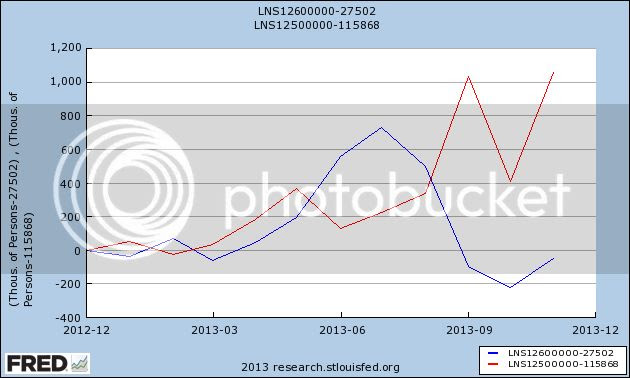 And as for the broader claim that the recovery has "accelerated the trend towards a part-time nation," here's the same graph showing gains or losses since employment bottomed at the end of 2009: 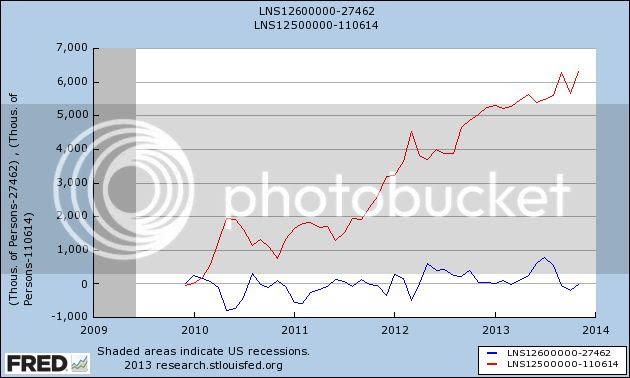 That's probably why, for the last 3 months, when it comes to full time vs. part time jobs, there's been crickets from the Doomers.

And Zero Hedge has gone from treating the jobs report numbers as Gospel truth  to calling it the "BLS random number generator."

I'm sure in 2014 Doomers will be back with selectively quoted statistics of the month. And I'll be here debunking all of them.
Posted by New Deal democrat at 8:00:00 AM