The price of gasoline, at $3.84 a gallon as of this past Monday, is now only $0.10 less than it was at its spring peak, and less than $0.30 from its all time record high. With the Oil choke collar surprisingly engaged in late summer, we have a reak time test as to whether the weak spring/strong autumn employment reports are due to recession-induced distortions of seasonality alone, or whether we are actually seeing the Oil choke collar in action.

For now, my hypothesis that it is actually the Oil choke collar manifesting itself appears, well, wrong. 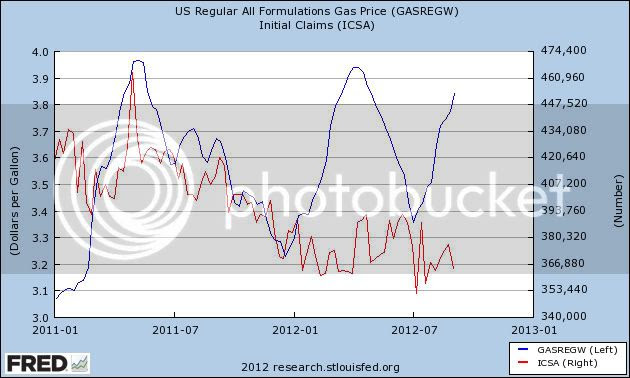 We can see the three nearly identical peaks of gas prices (blue) vs. the generally declining initial claims, with bumps up in springtime of both years -- several months after the price of gas takes off. In the last month, initial claims have also risen slightly. So far, it looks like my hypothesis could be right.

But look closer and you'll see that in 2011 there was also a small but noticeable rise in August and September, before a further decline asserted itself.

So let's look at the data another way. Karl Smith of Modeled Behavior has noted that initial claims have declined at a remarkably steady YoY rate for the last several years, suggesting that the alleged seasonal distortions completely disappear into the deeper trend once we look YoY. So here are the YoY% changes in gasoline prices and initial jobless claims (on the same left scale) over the same period as the first graph: 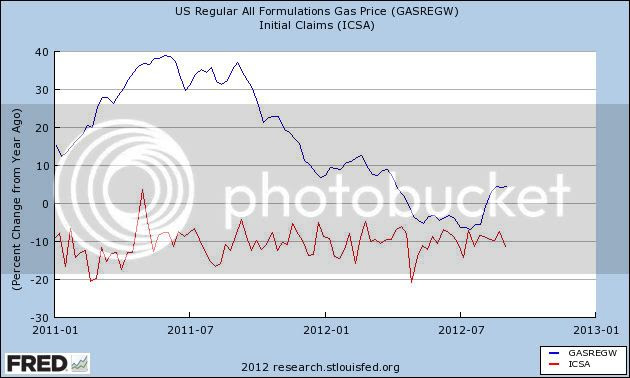 Now we can see that there has been a big change in the YoY price of gasoline over the last 18 months, but the downtrend in initial jobless claims has been remarkably stable within the -5% to -15% range, even including the slight increase during the last month.

Unless we start to see initial jobless claims rise to the level of 390,000 or so in the next 4 to 6 weeks, I'll have to conclude that the Oil choke collar hypothesis for explaining the apparent seasonal distortions in job numbers is busted.

If that happens because the economic news is better than I thought it would be, though, you may consider me happy to be wrong.
Posted by New Deal democrat at 2:00:00 PM