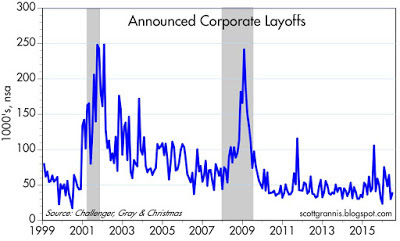 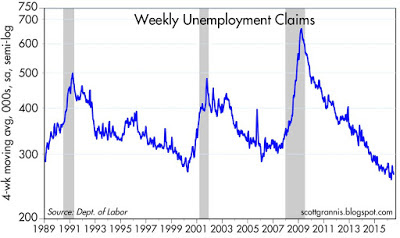 Bespoke on the Employment Report (Bespoke)

The first half, by contrast, ended on a high note, based on today’s payrolls release. The 265,000 increase in private-sector jobs in June is the biggest monthly gain since last December. “If you take the last three months and smooth these numbers out — which is really what you should do — employment conditions are improving, but there’s no question there’s, to some extent, a slowdown in the improvement,” says Hugh Johnson, chairman at Hugh Johnson Advisors, via Bloomberg.

Let’s put Johnson’s advice to work in the chart below, which clearly shows that job growth in the private sector has decelerated steadily over the past year or so. The trend eased to just a hair below 2.0% for the year through June, based on three-month averaging–the lowest in three years. A 2% pace is still a respectable advance, but recent history suggests we’ll see even lower growth rates in the months ahead. 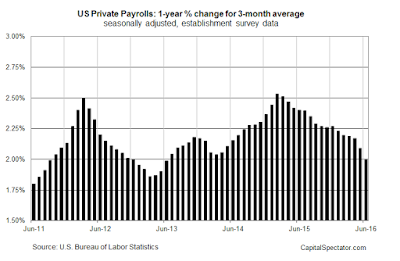 Barry on the Employment Report (The Big Picture)

Every single month, the Bureau of Labor Statistics releases their update on the Employment Situation. It is based on a model that, as we have painstakingly explained many, many times, is a near-real time, very noisy, error-laden, data series with a huge margin of error, that is subject to repeated revision and further benchmarking.

Let me remind readers (again) that the monthly employment situation report has a margin of error of 100,000 jobs. So last month could very likely have been as high as 173k (38 + 35 + 100) and this months could very likely be as low as 152k (287 – 35 – 100). If you understand this simple math, you should be able to understand why I insist on noting the actual BLS official monthly number ain’t all that.

The NYT's on the Employment Report (NYT) 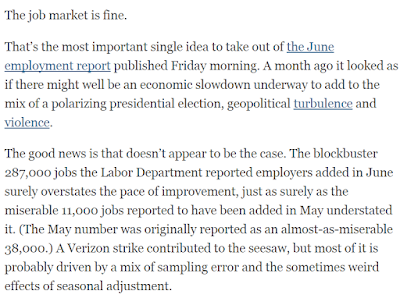 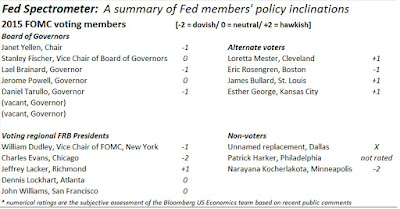 Shinzo Abe has won a sweeping victory in elections to Japan’s upper house and there is now a parliamentary supermajority that supports revision of Japan’s pacifist constitution.

With all seats declared, Mr Abe’s ruling Liberal Democratic party and its allies won 77 out of the 78 seats they needed for a two-thirds majority, but there are also four independents who support a constitutional revision.

That leaves Mr Abe in undisputed control of Japanese politics and gives him a once-in-a-lifetime chance at putting constitutional change to a national referendum.

Given the bare majority, however, Mr Abe is likely to proceed slowly. His most likely goal is to create a precedent for future constitutional reform rather than to scrap the war-renouncing Article 9 immediately.