Weekly Indicators for February 3 - 7 at XE.com: The Big Chill

This was the poorest week in a long time. Is it due to the weather, at least in part, or is this real consumer weakness spreading throughout the economy?
Posted by New Deal democrat at 9:37:00 AM

US Employment : Wow, Another Weak Report.

First, I have the rather unenviable task of filling in for NDD on this issue.  That does mean you'll get my somewhat different opinion about the employment report's importance.  I've grown to be less and less a fan of the monthly "US employment report" release for several reasons.  First, people only focus on the unemployment rate rather than the entire employment picture which includes such things as employer behavior (which is derived from the JOLTs report), employee confidence and labor utilization.  Second, this report is usually revised multiple times, so the first number could be an accurate number -- or nowhere near was happening.

In addition, this report as several one off points to deal with.  The first is the weather.  The entire country has been hit by massive weather disruptions over the last month or so.  We've seen this effect the ISM reports, housing numbers and auto sales.  In addition, this report has the deal with the effects of the expiration of unemployment benefits and the annual revision to the numbers.  This FT story explains this issue in more detail.

And we're off.  Let's start, well, at the beginning:

These are not wonderful numbers.  First, 113,000 is simply a weak number.  And the 194,000/month of growth for the last year is OK but we would do better.  What is interesting is the economy was growing strongly in the last two quarters of 2013, yet the employment growth numbers were still weak.

Both the number of unemployed persons, at 10.2 million, and the unemployment rate, at 6.6 percent, changed little in January. Since October, the jobless rate has decreased by 0.6 percentage point.

The good news here is the number didn't increase.  The bad news is it didn't meaningfully decrease, either.  This is where I think the weather did play at least a marginal role.  Let's face facts: heavy snowstorms would make is difficult to get to a job interview etc...

After accounting for the annual adjustment to the population controls, the civilian labor force rose by 499,000 in January, and the labor force participation rate edged up to 63.0 percent. Total employment, as measured by the household survey, increased by 616,000 over the month, and the employment-population ratio increased by 0.2 percentage point to 58.8 percent.

This is where some of the re-benchmarking issues come into play.  The household survey number is very impressive.  Also remember this household employment number tends to lead the establishment survey.

Overall job growth was fair (see tables here).  There simply wasn't enough of it.  This is also the third month in a row when the total number of professional service jobs added has been weak.

The hours worked decline is disappointing.  However, the 5 cents/hour increase is good news.  But -- just to throw a cold blanket on that number -- hourly earnings only increased 1.9% over the last 12 months.

The market view this report as disappointing.  However, I would add the important caveat that here the weather is probably playing a role in the slowdown.

NDD will add his comments later today.
Posted by Unknown at 7:51:00 AM The Japanese ETF has broken support in both the lower 11's and the 200 day EMA.  This move was telegraphed by the slowing declining MACD over the last 6 months.
Posted by Unknown at 11:00:00 AM

Is he Oil choke collar finally letting go of the US economy?

I have a new post up on the Oil choke collar over at XE.com.
Posted by New Deal democrat at 7:12:00 AM

While inflation does not explain all of the problems faced by these countries, it is clearly a contributing problem.  And considering the most of these countries also have high unemployment, we can conclude there are systemic issues at work.

Yes, It's A Correction. No, You Shouldn't Panic

The markets have been selling off since the beginning of the year.  Considering equities have been rallying strongly for most of last year, and that money managers poured money into the market at the end of the year to dress up their numbers, some reactionary sell-off was warranted.  And no, it's not time to panic. 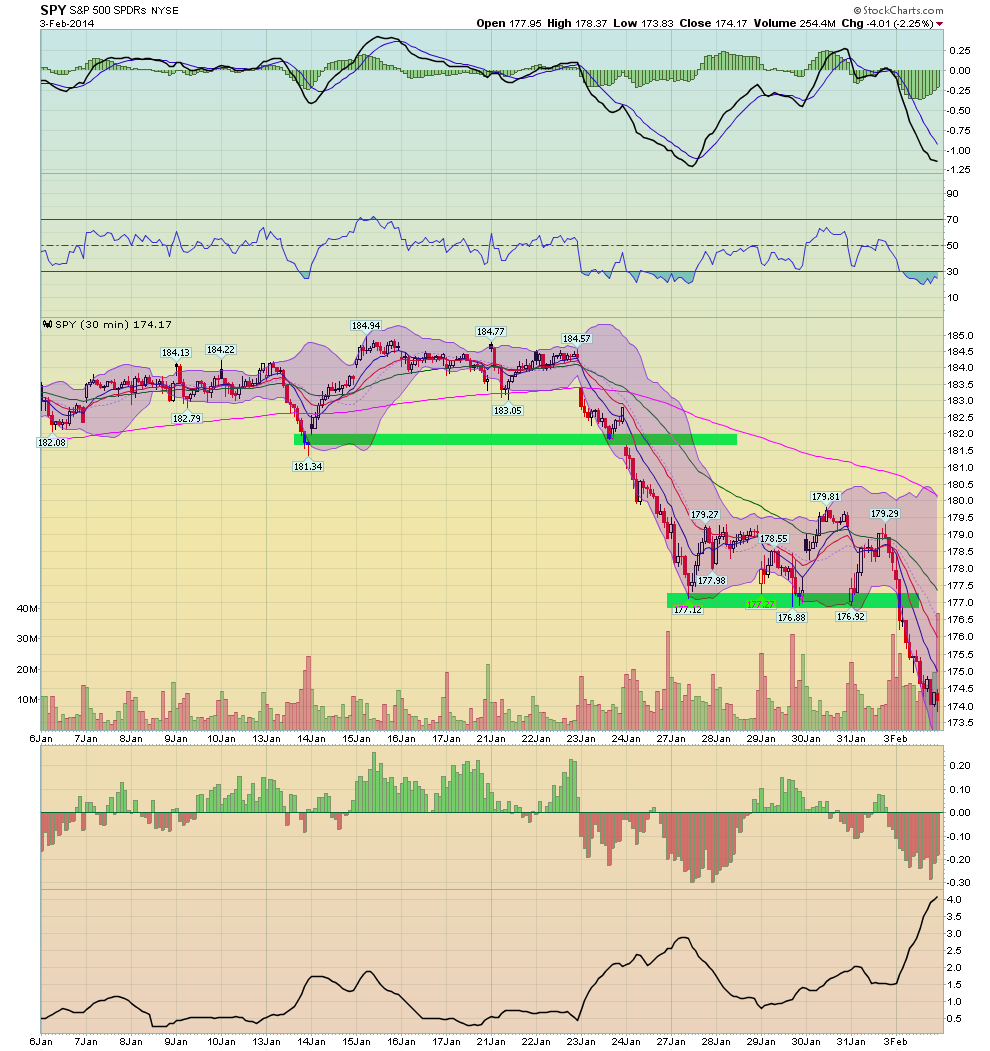 We see two strong sell-offs. The first is through the 181.31 level of support and the second is through the upper 176/lower 177 level.  Both sell-offs have been strong and occurred on higher than usual volume.  From peak to trough, the overall sell-off is from about 184 to 14 or a loss of almost 6%. 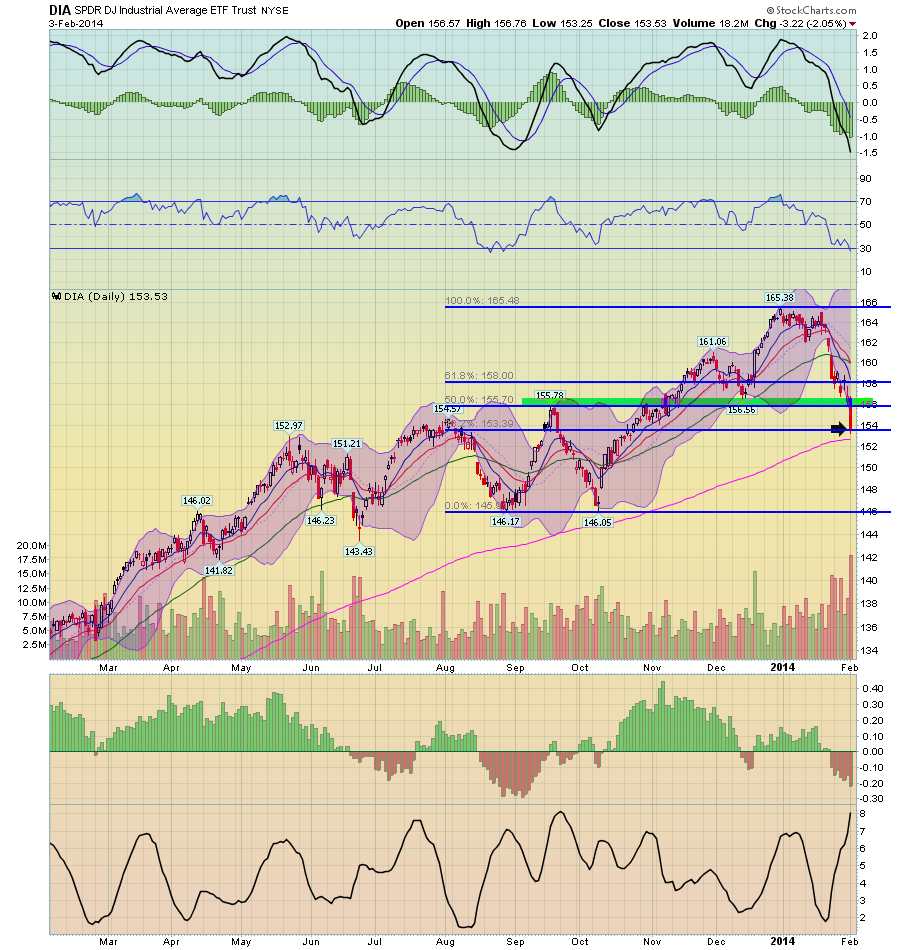 Above is a chart of the daily price action.  Prices are now at important Fib levels as well as the 200 day EMA -- a very important technical point.  The sell-off has obviously hit momentum and increased volatility (increased Bollinger Bands).

But, even if prices move below the 200 day EMA, it will most likely be the result of an overly aggressive selling instinct.  While we are reading reports about traders being concerned with economic growth, remember we are seeing weaker numbers partially because of weather-related factors.  Once we thaw out, I would expect a return to more consistent, positive numbers. 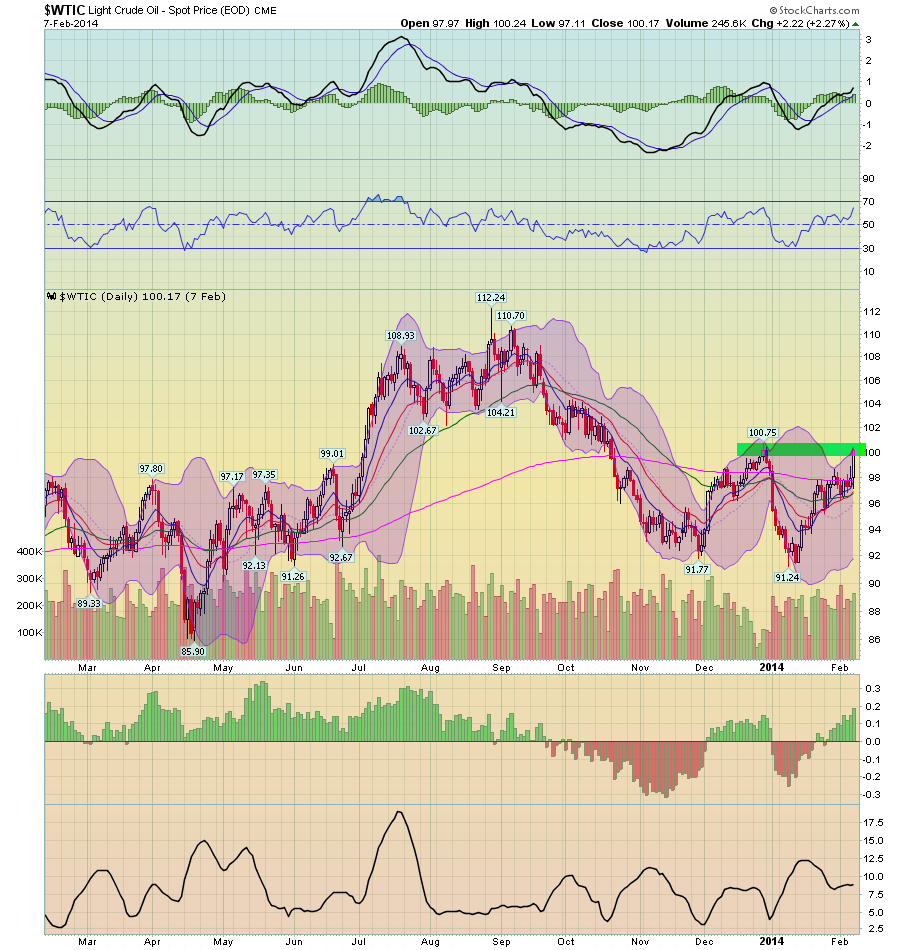 Oil has been trading between the upper 90s and 100 area for the last four months.  However, prices have again risen to the key resistance area of ~100.  Also note that prices are now about all the EMAs -- including the 200 day EMA.
Posted by Unknown at 6:00:00 AM

If consumers can't buy, and can't refinance, a recession follows

It's not too often when the Progressive point of the day coincides exactly with something wonky I was going to say, but well, today is such a day.

From the New York Times via Charlie Pierce and Atrios, we learn that


As politicians and pundits in Washington continue to spar over whether economic inequality is in fact deepening, in corporate America there really is no debate at all. The post-recession reality is that the customer base for businesses that appeal to the middle class is shrinking as the top tier pulls even further away.

In the 4th quarter of 2013, consumers only got a little help.  We got two reports on median wages in the last couple of weeks.

Usual weekly wages went up $1 adjusted for inflation in the 4th quarter.  The post-recession bottom was in the 3rd quarter of 2012 and the 1st quarter of 2013.  Usual weekly wages have stagnated since the end of the tech boom, now nearly 15 years ago.  The big jump during the recession is when gas prices fell from $4.25 a gallon to below $1.50 a gallon, and the decline from 2009 through 2012 was gas prices going right back up to nearly $4 a gallon again.

Last week the Employment Cost Index was reported.  This is another median measure.  In nominal terms, median wages rose over 2% for the first time in over 4 years:

.
Which brings me to my reminder that the middle class being unable to refinance due to either a rising asset price like their house, or due to lower interest rates for at least 3 years, has been a precursor to recession: Interest rates made a likely once-in-a-liefetime low in July 2012, over 18 months ago, and as this graph from Mortgage News Daily shows, refinancing has dried up:

As much as Pierce, Atrios and other progressives dislike the current situation, imagine a new recession and X millions more Americans losing their jobs.  That we will have an incomplete recovery before that happens is my biggest fear. 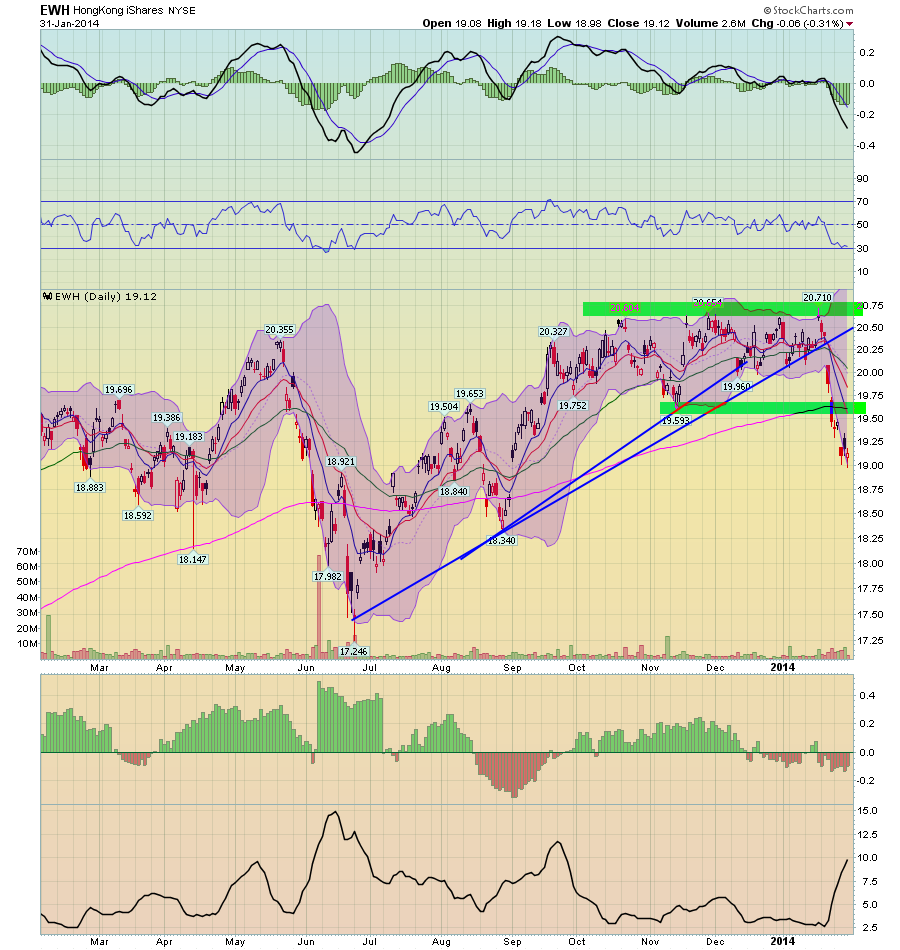 While China has been printing economic numbers showing a slowing economy, the primary ETF that is taking the hit for this slowdown has been the Hong Kong ETF.  The ETF continued to hit resistance at the 20.75 level for several months before sharply selling off over the last few weeks, sending prices through all the EMAs -- including the 200 day.
Posted by Unknown at 6:36:00 AM