The primary movers -- in differing directions -- were interest rates, manufacturing, oil prices, and several housing-related metrics.
Posted by New Deal democrat at 8:42:00 AM

$3 a gallon gas has returned!

According to GasBuddy, as of this morning the average price of gas in the US is $3 a gallon:

I suspect that this is a significant psychological threshold. While it's not a "shock," which historically has caused Americans to cut back their spending by double the increased amount that they spend on gas, causing a recession, it might very well cause a 1:1 retrenchment, which will be felt by discretionary spending like restaurants.  And, of course, it recirculates more of the currency outside of the USA into the treasuries of petroscheikhdoms.

An interesting byproduct is that the regional Fed districts which suffered the most from the downturn several years ago are turning in the best manufacturing and new orders growth in any of the districts now.
Posted by New Deal democrat at 9:33:00 AM

Housing market shows no sign of stalling out yet

Now that all of the major reports are in, I take an extended look at the state of the housing sector.

The two most positive measures for housing remain undaunted


We won't have a more complete picture of the housing market this month until tomorrow's release of existing home sales, but although they are about 90% of the total market, they are the least important economically.

What we can say is that, so far, the recent increase in mortgage rates has not dented the momentum of the new home market, at least as far as the two most positive measures -- purchase mortgage applications and new home sales -- are concerned.

First of all, although refi is dead -- it just made a new 17 year low -- purchase mortgage applications made a new expansion high in the last month. Although their rate of increase has decelerated in the past year, as shown on the graph below (h/t Calculated Risk) (sorry for the blurry quality, but I wanted to zoom in on the recent few years): 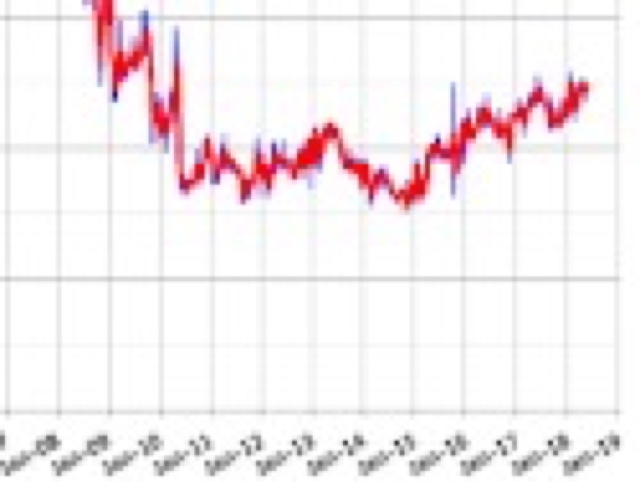 the fact remains that for all of a few weeks, this year they remain solidly positive YoY.

There is no hint of a change in direction here.

Median sales prices for new homes did plummet this month:

but this is a very noisy and heavily revised metric, and I wouldn't be surprised in the slightest to see this downturn revised away one month from now. In addition to which, prices typically follow sales, so I would not expect prices to turn down meaningfully until after sales do.

To sum up: these two have been the most optimistic ones for the entire housing market, and they remain so.
Posted by New Deal democrat at 10:10:00 AM


Paul Krugman is coming closer to embracing my "taboo" argument.

A month ago I wrote that raising wages was becoming a taboo. I considered three alternative hypotheses:

[I]n recent years, economists have discovered another source: the growth of the labor market power of employers — namely, their power to dictate, and hence suppress, wages.....{Monopsonistic f]irms [which pay less than "competitive" wages] bear the loss in workers (and resulting lowered sales)  in exchange for the higher profits made off the workers who do not quit.

2. skittishness about the longer term economy

Since 2000 there have only been about 4 years at most (2005-07 and 2017) where the economy has seemed to be operating at close to full throttle.  If I [an employer] raise wages now, I will attract more workers, but then when the good times end, I will be stuck with a higher paid workforce than my competitors who haven't raised wages. If I think that "bad times" are likely to exist more often than "good times" in the foreseeable future, then I might hold back on increasing my labor costs during the good times ...
3. taboo
[A]n economic taboo [is a] decision to leave profits on the table because they conflict with an even higher priority held by the employer .... [If] I am an employer who *does* believe that the good times are likely to last, BUT I also believe that people who come to work for me ought to be grateful to earn, say $10 per hour, and because of my firm ideological belief, I am not going to budge. If ... my ideological belief is shared on a widespread basis by my competitors and other businesses, I am *not* at a competitive disadvantage. Thus depressed wages may persist because raising wages has become a taboo,
Using the JOLTS data, I concluded based on the persistently excessive level of job openings vs. actual hires, together with the near record number of quits, that hypothesis number 3, "taboo," best fit the evidence.

Again, to briefly summarize: if skittishness about the durability of a strong economy were the primary driver of lower wages, I would not expect those employers to even go looking for new employees to hire at higher wages. In other words, there wouldn't be an elevated number of job openings vs. actual hires. Further if it were monopsony, we shouldn't see the near record number of employees quitting their jobs to take other, higher-paying jobs. Also, we wouldn't see the mismatch between hires and openings among small employers without monopsony power -- but we do. So "taboo" is the best hypothesis.

A couple of weeks ago, Krugman looked at the issue preliminarily, and tentatively plumped for the "skittishness" argument:

OK, here's my theory about ... wages. What employers learned during the long slump is that you can't cut wages even when people are desperate for jobs; they also learned that extended periods in which you would cut wages if you could are a lot more likely than they used to believe. This makes them reluctant to grant wage increases even in good times, because they know they'll be stuck with those wages if the economy turns bad again.

Sunday he took another whack at it, and he appears to be moving off the "skittishness" argument towards the "taboo" argument, even citing the same high number of quits in the JOLTS report that I did:

One [reason for stagnant wages] is simply that it has been a long time since labor markets were tight. Most  HR managers, I would guess, don’t remember what a full employment economy is like. They find the idea that there aren’t tons of highly qualified workers lined up for every job opening shocking – and,  inevitably, blame the workers.

More speculatively, I’ve suggested that employers are especially unwilling to raise wages because they remember the Great Recession, and don’t want to lock in higher wage costs.

Either way, I’d argue that the combination of downward nominal wage rigidity and monopsony power helps explain both why wages didn’t fall during the period of high unemployment and why employers aren’t doing much to raise wages despite tight labor markets now."

Krugman's first alternative is pretty close to what I've been saying:
learned behavior - check
no longer rewarded - check
resulting caterwauling and foot-stomping - check
What Krugman hasn't fully embraced yet is that the same behavior by employers has persisted for several years, as shown by the spike in job openings vs. stagnant actual hires in the JOLTS data over the last 24 months. By now the HR managers Krugman describes ought to be over their shock and busily raising wages, or training new hires to impart the necessary skills. By and large, they're not. That, Professor Krugman, means it's a taboo.
And by the way, Professor, when you get around to crediting the inspiration for your insight:
[cueing 007 music]
The name is democrat.
New Deal democrat.

It's a slow start of the week, so let's catch up on one of my favorite indicators, real retail sales, which were reported last week.
First of all, adjusted for population, real retail sales have peaked a year or more in advance of each of the last two recessions.  That hasn't happened yet, as the long term rising trend is intact, even if sales have backed off their wintertime highs

If they go longer than 6 months without making a new high, then it would be a signal for caution. But we're not there yet.
Also, in the short term consumption leads hiring, so let's update that comparison (these are YoY% changes):

This suggests that there should not be any significant weakness in the job market in the next few months.
Finally, since I've recently noted that the YoY change in the Fed funds rate has a good track record of forecasting the YoY% change in jobs 12-24 months out, let's add that (green) into the mix:

I don't think we'll see a significant downturn in jobs until real retail sales growth decelerates to about half its current YoY rate.
Posted by New Deal democrat at 7:35:00 AM