The bifurcation between the shallow industrial recession and the resilient domestic economy is, if anything, intensifying.
Posted by New Deal democrat at 9:10:00 AM 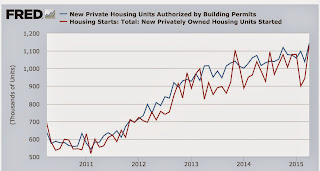 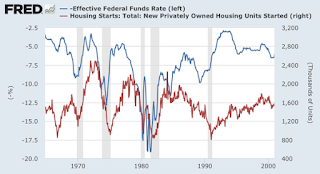 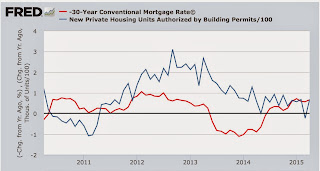 I have a new post up at XE.com, describing the shallow industrial recession since November, and why it is not now nor do I expect it to become an economy-wide recession.
Posted by New Deal democrat at 8:10:00 AM

Building and maintaining roads, bridges, sewers and so on is a core function of government, second only to national security at the federal level, and law enforcement at the state and local level.

Because of its importance, you'd think the boys at Powerline would have written about this topic.  Yet a google search of his site shows only a page and a half of stories over the last 10-12 years.  And there is no mention of the D+ grade given to the US' infrastructure condition by the American Society of Civil Engineers.  What about the 60 Minutes story on infrastructure?  Complete silence.   Or how about the fact that with interest rates at a record low, the US government could borrow at record low rates, repair infrastructure (after all, it's the second most important function of government) and then hire all those unemployed construction workers laid-off after the housing bubble collapse?  Silence.

Yes, dear readers, Hinderaker is that corrupt, stupid and incompetent.
Posted by Unknown at 7:12:00 AM

US Equity and Economic Review For the Week of May 11-15; A Really Unimpressive New High, Edition