I knew -- just knew -- as soon as I read the headline number on the latest employment report, that Ed Morrissey was going to weigh in with a negative analysis.  Why?  Simple: the report is just weak enough to say, "if only we had a president who put into place policies that allowed our dynamic economy to expand, then things wound be better."  And, sure enough, at the end of the piece, he delivers.

Actually, the answer for the somewhat weaker report is pretty easy to explain -- if you've been paying attention to such esoteric indicators such as the dollar, weak oil prices and the baby boomer retirement situation.

First, let's take a look at the dollar's chart: 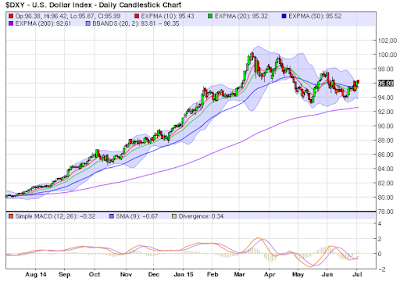 Ed -- you seem to be a bit unaware of some pretty basic economic concepts, so let me walk you through some baby steps.  Above is a chart, which is a pictorial representation ﻿of numerical information.  If you look at the top you see it's for the overall US dollar's value, which has risen for most of last year.  BTW -- the rising chart means people want to invest here (This also means your "gee the economy sucks" meme isn't in play with people who pull the trigger on transactions).  In addition, it also means that US exports are more expensive -- which just might explain the weak performance in durable goods over, say, the last year or so.  (On the durable goods report, you just might want to consider the falling price of oil and its impact on oil company capital spending as well).
And then there's oil: 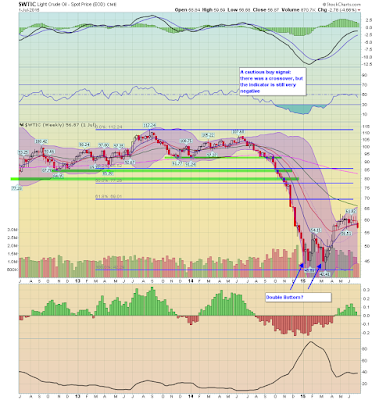 Oil is weak, Ed, which just might mean oil companies are cutting capital budgets (that means they're not buying all those really cool big things) and not hiring as many people.
Now, if you look carefully at the actual employment data, you'll see this table: 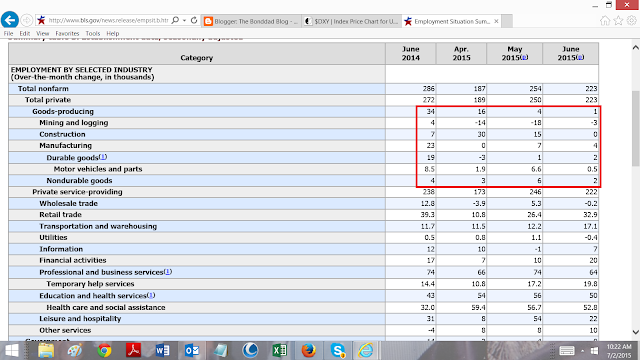 Ed -- you'll notice that goods producing jobs have taken a really large hit on a year over year basis.  In June of last year, they increased by 34,000.  This June they were up by a mere 1,000.  Do you think there just might be a relationship between a strong dollar and weaker manufacturing job growth?  Just maybe?  And what about weaker oil company spending?  Might that also be having a negative impact on durable goods manufacturers?  And if you make an absolutely wild assumption that the weak manufacturing sector (thanks to weak oil and a strong dollar) is also responsible for some service sector weakness to the tune of say, 15,000 jobs than you would get a total explainable establishment job loss of say, 48,000?  And, when you add 48,000 to 223,000 (careful, this involves math) you get a total establishment job report of 271,000 jobs -- which is about where we were before the strong dollar and weak oil hit?  Just maybe, Ed?
Ed then goes on to talk about the labor force participation rate.  First, thanks to Invictus over at the Big Picture doing all the heavy lifting, I can link to his research on the issue (see here).  However, researchers pretty much saw this coming because the baby boomers started to retire a few years ago.   Here's what Fed President Bullard said about the situation (previous link):
I have reviewed some of the available literature on this topic. My view of the literature is that carefully constructed empirical models of the hump-shaped trend in the U.S. labor force participation rate do a good job of explaining the data. These models suggest that the current participation rate is not far from the predicted trend. This means, in turn, that the cyclical component in labor force participation is likely to be relatively small.
Here's a translation Ed: a Federal Reserve President -- someone who actually has an advanced degree in economics and spends most of his life researching and writing about the topic -- says your analysis is 100% wrong.  Color me jaded, but his analysis has a lot more clout than yours.
And finally, there is this great canard from Ed's post:
We can say one thing about it — it’s consistent. It reflects the consistent state of the economy during the Obama recovery, which means it’s been stagnant, lacks any sense of dynamism, and is marked mainly by shrinking work forces in relation to population and shrinking expectations. Until we get economic policies that support American dynamism and innovation, this will be what we see — people cheering the continuance of a weak status quo while Americans workers simply give up.
Ed, Ed, Ed, Ed, Ed ... we're in the middle of a balance sheet recession and recovery.  You obviously don't know much about this concept.  You can start with Irwin Fisher's the Debt Deflation Theory of Great Depressions, (available with a simple google search) and then move onto Krugman's work on the Japanese economy of the 1990s (hate to break it to you, but the guy with the beard and the Nobel Prize really does know a lot about this).  After you've digested that information, then you'll be able to talk competently about the subject.  But, suffice it to say, balance sheet recessions are a lot harder to get out of.
Ultimately, Ed's analysis is predictable: a somewhat weak report allows him to advance an un-nuanced political narrative that is devoid of granular analysis.  It's part and parcel for the average political blogger.  And, we shouldn't really expect much better from his ilk.  However, we can say that his analysis shouldn't be taken seriously and, in fact, should the treated with a highly jaundiced eye.
Posted by Unknown at 10:54:00 AM