Liveblogging the Civil War: June 28, 1863, the actual high water mark of the Confederacy

As most people know, the Battle of Gettysburg was one of the turning points of the American Civil War. It is commonly stated that Pickett's charge at the climax of that battle was the "high water mark" of the Confederacy.

Except it really wasn't.  The confederate troops attacked from the north, while the Union troops arrived from the south.  How far north did the confederates actually make it?  To Wrightsville, PA, on June 28, as shown on the below map: 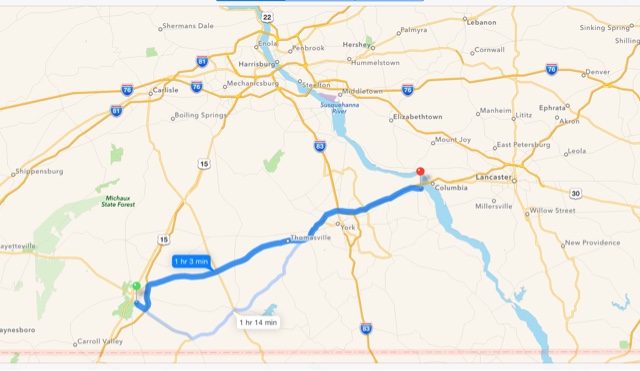 On that date, Union troops succeeded in burning the bridge over the Susquehanna River, preventing the confederates from crossing and exposing Lancaster, Harrisburg, and more importantly, Philadelphia to imminent peril.

It wasn't due to a sudden attack of brilliance on the part of Union generalship. Lee's troops crossed north into Pennsylvania while the Army of the Potomac was still organizing itself.  As word spread, panic-stricken farmers began fleeing north and east with their livestock and belongings.  An impromptu defense was organized of untested home guard militia, and wounded Union troops recovering in hospital.

On June 27 the confederate troops commanded by Gen. Early marched northeast from Gettysburg through Hunterstown, New Chester, Hampton, and East Berlin to York, PA. His cavalry rode through Hanover, Jefferson, and Spring Grove. They arrived in the vicinity of Wrightsville the next day with orders to destroy the bridge, then the longest wooden covered bridge in the world: 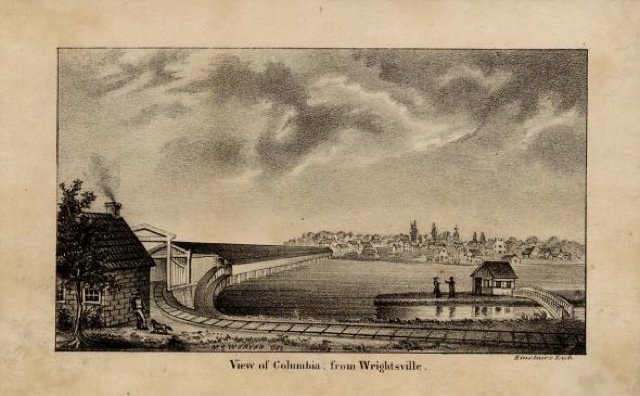 Meanwhile the Union General Frick organized his thin line of troops into a horseshoe shaped defense on the plateau on the west bank of the Susquehanna. When Early encountered this line, he not only shelled it frontally, but began flanking movements around the bottom of the plateau on both the north and south sides.  He had decided to capture and cross the bridge instead.  Had this not been spotted, he could have surrounded the Union troops and captured the bridge.

After a brief skirmish, realizing that their position was hopeless, Frick ordered his troops to evacuate across the bridge and destroy several sections of it behind them.

In a colossal act of pigheadedness, the toll-taker at the bridge refused to allow any crossings without each farmer and unit paying the toll first. Frick had to visit the owner of the bridge to get the toll waived so that a swift evacuation could take place.

Luck still wasn't with the Union, as their first attempt to dynamite pillars supporting several
sections of the bridge failed.  As confederate troops dashed towards the bridge, Union troops finally succeeded in setting fire to the western end.

The entire mile long bridge burned, and set fire to a lumber yard and a number of houses in Wrightsville. The local citizens had mysteriously misplaced their fire-fighting buckets, until their own houses started to burn.  To the credit of the confederates, they assisted the locals in putting out the fires in the town.  The next morning, as a sign of gratitude, the mayor hosted breakfast at his house for Gen. Early.

His plan thwarted, Early marched back southwest to Gettysburg.

Today, a bridge constructed in the 1930s crosses at virtually the same spot.  A pair of cannons marks the furthest east reached by the confederate invasion of Pennsylvania. 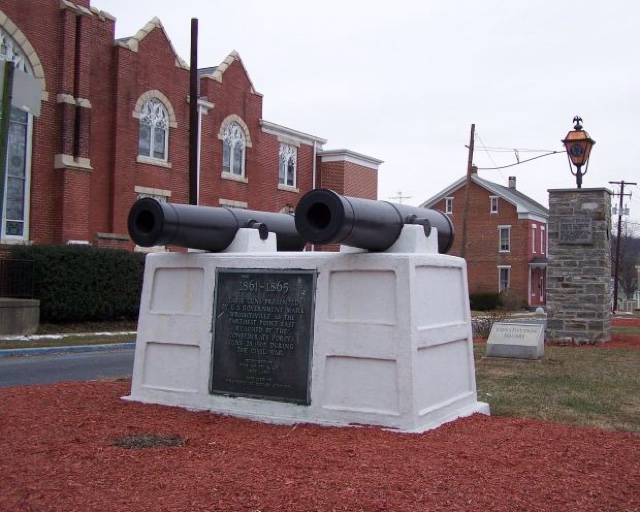 [This synopsis is drawn from the pamphlet "Farthest East," by the Wrightsville Historical Society]
Posted by New Deal democrat at 11:19:00 AM