The Consumer Price Index for All Urban Consumers (CPI-U) increased 0.4 percent in January on a seasonally adjusted basis, the U.S. Bureau of Labor Statistics reported today. Over the last 12 months, the all items index increased 1.6 percent before seasonal adjustment.

Increases in indexes for energy commodities and for food accounted for over two thirds of the all items increase. The indexes for gasoline and fuel oil both increased in January, continuing their recent strong upward trend. The index for food at home posted its largest increase in over two years with all six major grocery store food group indexes rising.

The index for all items less food and energy also rose in January. The indexes for apparel, shelter, airline fares, and recreation all posted increases. In contrast, the indexes for new vehicles and for used cars and trucks declined in January.

Let's take a look at the data in graph form. 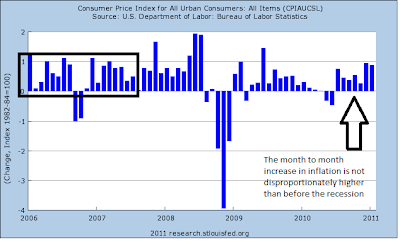 First, notice that the month to month percentage increase over the last six months is more or less in line with the rate of increase before the recession. In other words, our current experience is not out of line with past experience. 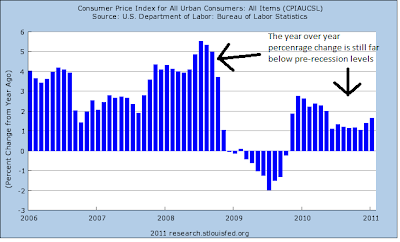 Just as importantly, the year over year percentage increase is still below previous levels, indicating inflation is not out of control in any way.

With food prices spiking, it's important to remember that food as a percentage of income in the U.S. is the lowest in the world. Hence, it's it's far easier for the U.S. to absorb rising food prices. However, private transportation prices represent 16.082% of the CPI, making energy prices a bit harder to shake off.
Posted by Unknown at 11:30:00 AM