Before we look at today's report, let's step back and take a longer-term view about the employment situation to see where we are. The four employment graphs that follow do not include today's report. 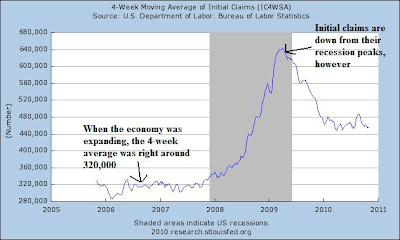 Taking a long-term view of initial unemployment claims, notice the 4-week EMA was around 320,000 when the economy was growing. We also see the recession spike followed by the current situation. 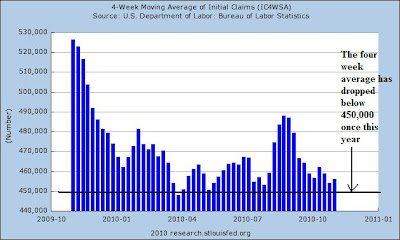 The 4-week moving average of initial unemployment claims, which have been stubbornly high for the entire year. The average has moved below 450,000 once during the last year, indicating there are still a fair number of lay-offs out there. While the number is down from its peak, it is about 100,000/week higher than the number was during the expansion. However,

as the Challenger job cut survey shows, the total job losses have more or less leveled off for the last year. 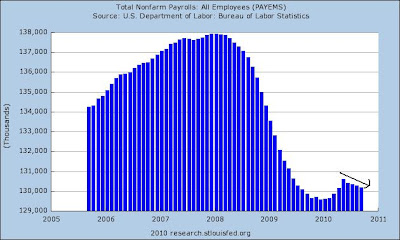 On a seasonally adjusted basis, the jobs picture bottomed right around the beginning of the year. after which we saw a few months of decent gains. However, starting about 6 months ago that upward surge dried up. The arrow on the chart shows that total jobs started to decline around that time. The rate of decline is small -- that is, we're note seeing a huge jobs crush. However, there is an overall loss occurring. 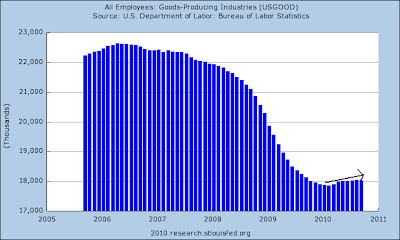 Good producing industries -- which account for 13.83% of all establishment jobs -- have actually adding jobs, although at an incredibly slow pace. 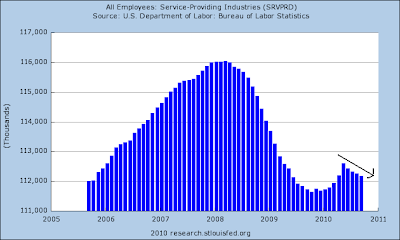 Service producing industries - which account for 69% of all jobs -- are the real problem. Notice this chart bears a striking resemblance to the total establishment jobs chart. 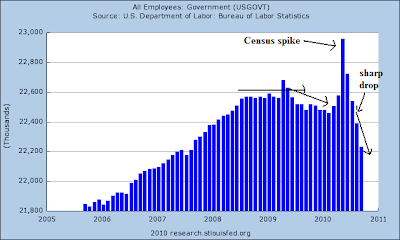 Government employees -- which account for 17% of the workforce -- actually leveled off from mid-2008 onward. We can also see the big census spike and a big drop in the last two months. As NDD has noted, this has been caused by the end of the stimulus and its grants to the various states.

The above graphs illustrate the primary problem with the economy: even though lay-offs are continuing at above average levels and therefore feeding into the unemployment system, the pace of job losses has been level for about a year. The primary issue is lack of job creation, which more or less stalled about six months ago.

The headline number is very strong -- frankly, much stronger than I expected.

This is a nice increase across a variety of industries

Let's look at the charts from the report:

The unemployment rate was unchanged, but we got a nice bump in the establishment jobs report.

Also from the report, in no order of importance

I'll be looking at the report in more detail today and over the weekend and will add anything that seems pertinent.