This investment has risk.  It's certainly not for everyone.  Please talk to a professional before doing anything.  And, perhaps most importantly, I could be wrong.

According to the Finviz.com website, there are 29 companies in the oil and gas refining industry.  Valero is the second largest.  They are the third cheapest by current PE and fourth cheapest by future PE.  Not only is the company cheap from a value perspective, they are trading near the bottom of their 1-year range: 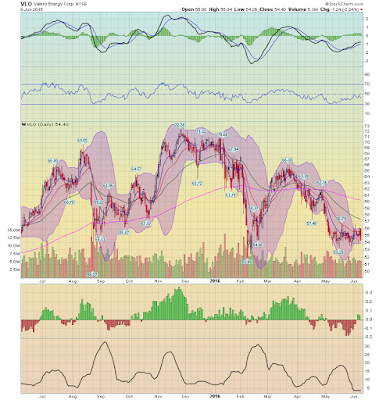 Everything Looked Good in their 2015 Annual Report

The balance indicates the company is conservatively managed.  Over the last 5 years, they increased their current ratio from 1.54 to 2.03 and quick ratio .78 to 1.2.  Accounts receivable has decreased from $8.7 billion in 2011 to $4 billion in 2015, which decreased AR from 20% of assets to 10%.  This indicates the company is not extending credit to bolster sales – a very prudent development in the current low oil price market.  Inventory as a percentage of assets fluctuated between 13-14%, indicating the company is handling the slowdown well.  And total cash increased from $1 billion to $4 billion over the last 5 years.

Their cash flow statement is also impressive.  Since 2011, cash from operations has fluctuated between $4 and $5.6 billion.  This is more than adequate to cover their net investments in property, which have varied between $1.4 billion and $2.9 billion over the same period.  The difference between the two has left adequate capital for a stock buyback and dividend payment program (see below).

While revenue dropped 33% in 2015, COGS dropped 37%, leading to an increase in net income.  This was reflected on their cash flow statement.

Unlike the favorable revenue/cost effects in fiscal 2015, VLO had a bad first quarter.  From the 10-Q:

These poor results create a buying opportunity.  And the future looks brighter than implied by the latest quarterly results.  Crack spreads are increasing, meaning the company should see an uptick in revenue and profit.  Increasing oil prices should increase VLOs sales amount.  Finally, the summer driving season should mean an increase in overall demand.