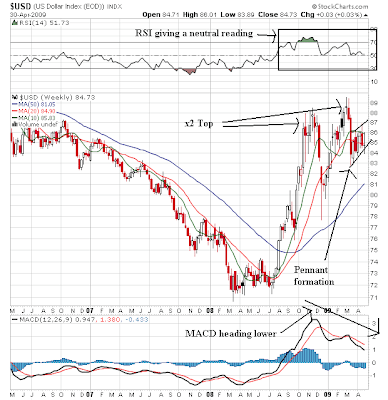 The weekly chart of the dollar shows that prices formed a double top with the first top occurring at the beginning of 4Q08 and the second occurring in 1Q09. However, both the RSI and MACD formed lower highs on the second top indicating a weakening trend. Prices have sold off since the second high and formed a pennant pattern. Prices are tied in with the 10 and 20 week SMA. The MACD is still moving lower and the RSI is giving a luke warm reading right now. 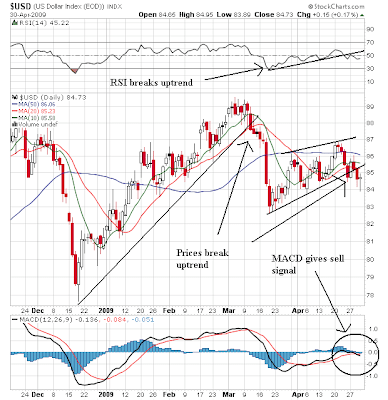 On the daily chart we can see prices break through the uptrend of the second top along with a break of the current pennant pattern. Also note the RSI has broken its trend and the MACD has given a sell signal. Prices are below all the SMAs, but the SMAs are still in a tight pattern so that position isn't as important.

However, there was an article earlier this week on Bloomberg that says either way the dollar will be moving higher (or at least not moving much lower). The reason is the following:

1.) If the world economy remains in a recession, the dollar will have a safe haven status keeping it higher.

2.) If the us recovers the dollar will be attractive.

In other words, either way the dollar is a winner.
Posted by Unknown at 6:23:00 AM