In the last 7 recessions, beginning in 1970, the median decline in wage growth has been  -2.1%. Which means, to have a cushion against wage deflation in the next recession, whenever it comes, we want to start out with nominal YoY wage growth substantially more than 2%.  That's where the poor +.2% growth in median wages in the 2nd quarter is important. That same positive trend is apparent when we measure by real average hourly wages: 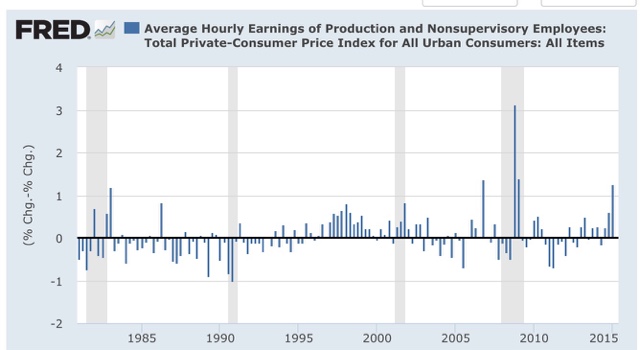 which in the first half of 2015 have been among the best since 1980.  The improvement, as I have noted many times, is primarily about the change in the price of Oil.

So the meme that *cyclical* wage growth should improve if the labor market continues to tighten is likely correct, despite the poor ECI report last week.

The problem comes when we examine wages from a very long term, secular viewpoint, in nominal terms.  Here's a graph from the Wall Street Journal,
http://www.wsj.com/articles/u-s-employment-costs-rise-0-2-in-second-quarter-1438345911
showing the nominal quarterly change in median employment costs, going all the way back to 1982: 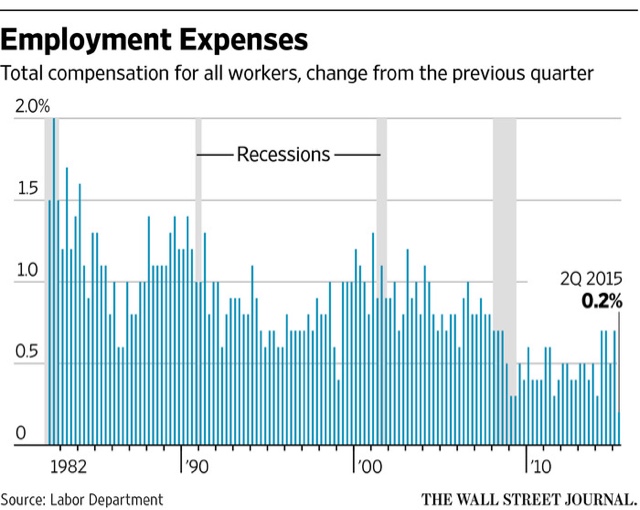 It is easy to see a declining trend over time, from over +1.5% at the beginning of the 1980s through generally persistent growth of less than +0.5% per quarter beginning during the Great Recession.  In other words, over the very long term, quarterly wage changes are moving towards zero.

The same secularly declining trend appears when we measure by average hourly wages, by the way: 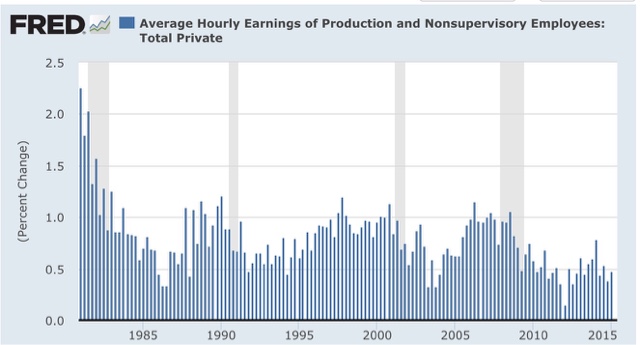 This secular deceleration towards zero in nominal wages ought to be setting everybody's hair on fire.  There is a world of difference between declining from, say, 4% to 2%, and declining from 1% into outright wage deflation of -1% (or worse), in a recession.

Simply put, we are more at risk for a wage-price deflationary spiral in the next recession than we have been at any point since the 1930s, including being substantially more at risk than we were in 2007.