An initial note: this is a pretty slow news week. I do plan on a housing roundup over at XE, and if something looks especially interesting in the personal income and spending report, I'll comment. Aside from that, expect sparse posting from me.

But because I am a curmudgeon, and the scourge of DOOOMERs, herewith a dissection of a post I read this morning that had me shaking my head.

Mish, who's called for recession about 3 or 4 times in the last 8 years, is at it again, this time claiming that "Recession is Close," making use of the Philadelphia Coincident Indicator Index. I've reproduced his annotated graph below: 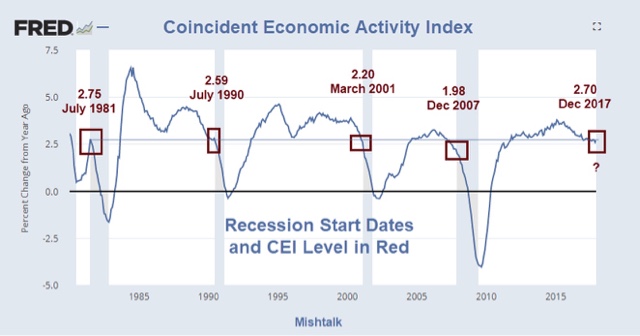 So the first thing that caught my eye is that the index hasn't changed much in the last year. Here's a closeup of the same YoY information:

In December, as Mish highlights, the value of the index was +2.7. But beginning a year ago in January, it has *also* been 2.7 or even less in 8 of 12 months. So, by his own standard, shouldn't a "recession have been close" a full year ago?  Did I miss the "Recession of 2017" or something?

Next, in 3 of the last 4 recessions the YoY value of the index was declining sharply in the six months or so before their onset.  Not so in 2017. So rather than YoY, here is the m/m change in values of the Coincident Index (from which I've subtracted -.2 to show the deceleration prior to the onset of recession):

Typically the m/m change in the Index was declining from +.3 or above to below +.2 in the six months before the recessions started. Now here's a closeup of the more recent data:

No such sharp deceleration here. Pretty much muddling along at +.2 or +.3. Not spectacular, but not suggesting any big dip in the next few months.

Finally, he takes a potshot at the Leading Index for the United States. Here's a graph comparing the two series: 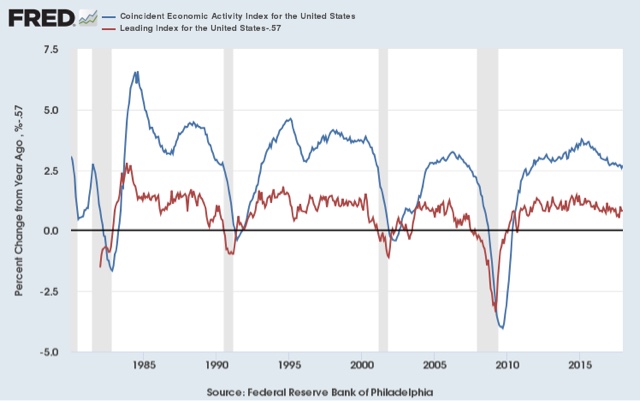 The most positive value of the Leading Index in the month before any of the last 3 recessions was +0.57, so I've subtracted that in the graph above.  Note that the leading index is well above that level now.

He doesn't like housing permits as a leading indicator, but does like starts. So let's look at both of those:

Housing starts, after a decline in mid 2017, in the last five months have risen to their previous highs from late 2016-early 2017, so they give him no help either.

You're not going to get any help from people who flit from data series to data series in support of the same old thesis, only to forget about them when the data goes the other way. While every economic cycle is a little different, and political decisions can throw a monkey wrench into the works at any time, left to its own devices there's simply no evidence that the economy is close to a recession now or will be in one before the end of this year.