In the last several years, I have written a number of posts documenting the stagnation in average and median wages, for example here and here.  Several of the series were just updated for the first quarter, so now is a good time to take another look.

The good news is that, with underemployment under 10%, we are generally continuing to see improved real wage growth compared with earlier in this expansion.  The below graph tracks monthly average (mean, not median) hourly wages (blue), median wages from the employment cost index (red), real compensation per hour (brown), and median usual weekly earnings (green). All are adjusted for inflation.  Since the quarterly index of median wages only started in Q1 2001, I have normed the indexes to 100 at that time: 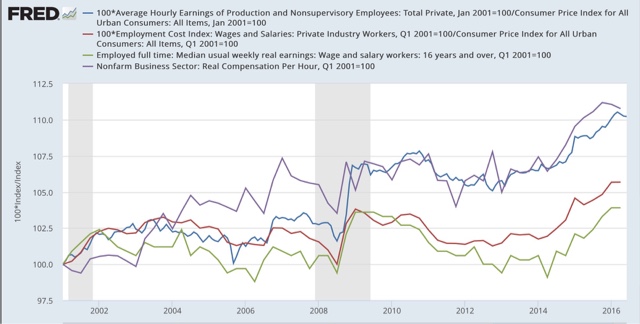 Real compensation per hour did decrease in Q2. Otherwise, all 3 other measures are at highs since the turn of the Millennium. 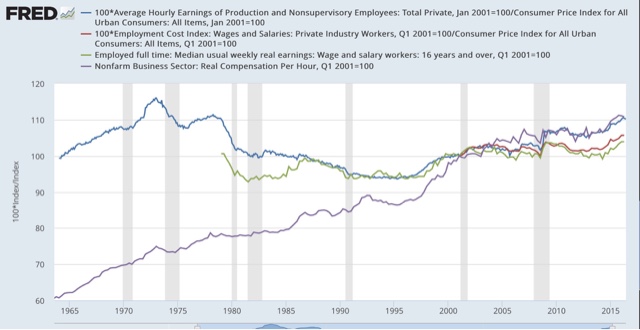 Now let's look at the same information YoY.  This tells us about the rate of growth: 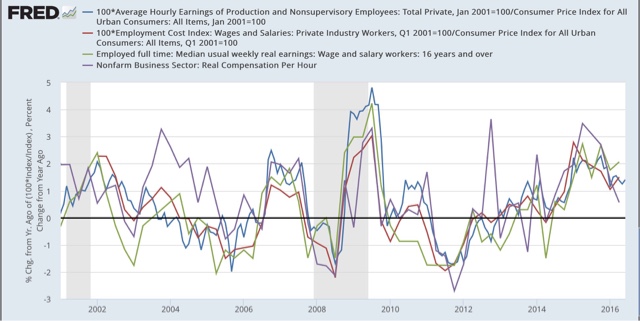 The rate of  YoY% growth peaked for all 4 series in the first half of 2015, and have shown decelerating growth since.  This shows us how dependent real wage growth has been on the price of gas, since that has been the primary determinant of consumer inflation over the past 15 years.

Gas prices are probably close to bottoming if they haven't already, which suggests that the rate of YoY wage growth has probably peaked for this cycle, even though with just under 10% underemployment, we have yet to reach full labor utilization.