Drug Prices in the Spotlight?

Members of Congress are in an unusual position as they demand an explanation for Mylan NV’s 400 percent price hike for the EpiPen and focus attention squarely on its CEO: Heather Bresch.

If lawmakers follow the usual script, Bresch could get called up to Capitol Hill next month to explain her company’s justification for raising the price on the life-saving allergy shot. But that could be awkward, since she’s the daughter of Democratic Senator Joe Manchin of West Virginia.

The scrutiny on EpiPen intensified Wednesday after Democratic nominee Hillary Clinton called the price increase “outrageous,” sending Mylan’s stock down as much as 6.2 percent. The intense political pressure could lead regulators to speed up their review of a rival product by Teva Pharmaceutical Industries Ltd., according to some analysts, or force Mylan to curb prices -- in both cases hurting revenue and profits.

Table of the 10 Largest Companies in PPH

1-Year Chart of the PPH ETF 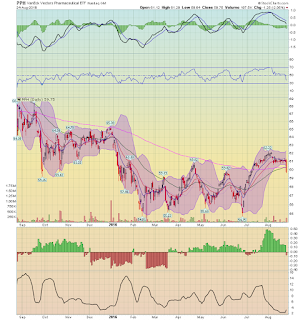 Table of the 10 Largest IBB Members

1-Year Chart of the Biotech ETF 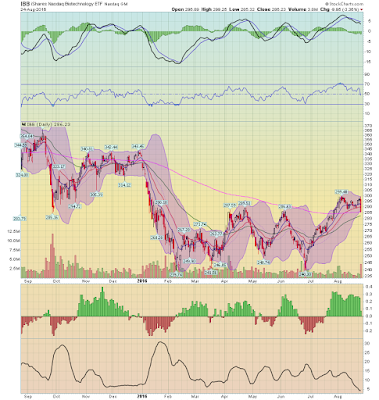 Income from bonds, especially government and fixed-income bonds, is a bedrock of pension investing. Years of declining bond yields have made it far harder for funds to buy an income for their members, leading to desperation tactics like those seen at Central States.

Bond yields have been falling globally since the early 1980s, initially in response to the US Federal Reserve’s success in bringing inflation under control. Meanwhile the returns on stocks, where pension funds put most of their assets, have been hurt by two major market crashes since 2000. In the US, the assets held by pension funds have roughly doubled — up 105 per cent — since 1999, but the cost of their liabilities to pensioners has almost quadrupled — up 278 per cent, according to the actuarial group Ryan ALM.

The result is enormous pension deficits. In the US, pensions run by companies in the S&P 1500 index were underfunded by $562bn by the end of last month, according to Mercer — nearly $160bn wider just seven months earlier thanks to further drops in bond yields.

Not Much Slack Left in the Labor Markets (Conversable Economist)

When the US monthly unemployment rate topped out 10% back in October 2009, it was obvious that the labor market had a lot of "slack"--an economic term for underused resources. But the unemployment rate has been 5.5% or below since February 2015, and 5.0% or below since October 2015. At this point, how much labor market slack remains? The Congressional Budget Office offers some insights in its report, An Update to the Budget and Economic Outlook: 2016 to 2026 (August 23, 2016).

I'll offer a look at four measures of labor market slack mentioned by CBO: the "employment shortfall,"  hourly labor compensation, rates at which worker are being hired or are quitting jobs, and hours worked per week. The bottom line is that a little slack remains in the US labor market, but not much.

The collapse of oil prices that began about two years ago—from just over $100/bbl to just under $30/bbl—threw a wrench into the gears of the US economy by causing a sharp drop in oil exploration and drilling-related activity. In turn, this resulted in a slump in industrial production and a rash of layoffs, all of which subtracted meaningfully from the health of the US economy. The impact of the oil patch slump was most acute last February, when spreads on high-yield energy bonds soared to almost 2000 bps—a level matched only during the depths of the 2008 financial panic. From the beginning of the US economic recovery in mid-2009 through the third quarter of 2014, just before oil prices started to plunge, the economy grew at a 2.25% annualized rate. From September 2014 through last June, the economy grew at only a 1.7% annualized rate. Arguably, the oil price collapse subtracted half a percentage point of growth per year from the US economy for almost two years.

It now appears that the negative effects of the oil price collapse have passed. Drilling activity appears to have recovered in recent months, and oil prices have bounced from just under $30/bbl to almost $47/bbl today. High-yield energy bond spreads are back down to 740 bps, and the S&P 500 index is up almost 20% since mid-February. The ISM indices have bounced reassurringly.