Looking at a chart of the SPYs, we see that prices have formed a symmetrical triangle.  However, while we see a technical compliance with this pattern, it's a moderately weak formation.  Notice that for a period of about two weeks, prices clung to the upper trend line.  Ideally, in a triangle formation, we'd like to see clean hits followed by a more away from the trend line.  And while we do see strong volume on the break-out move, the fundamental back-drop is less than encouraging.  I personally don't think there is any positive reason for the recent coordinated bank liquidity move.  In addition, the EU situation continues to hang on the precipice.  In short, I wouldn't be trading this as an upside break out just yet.  Prices would need to move through the 129 price level before I'd commit to the rally. 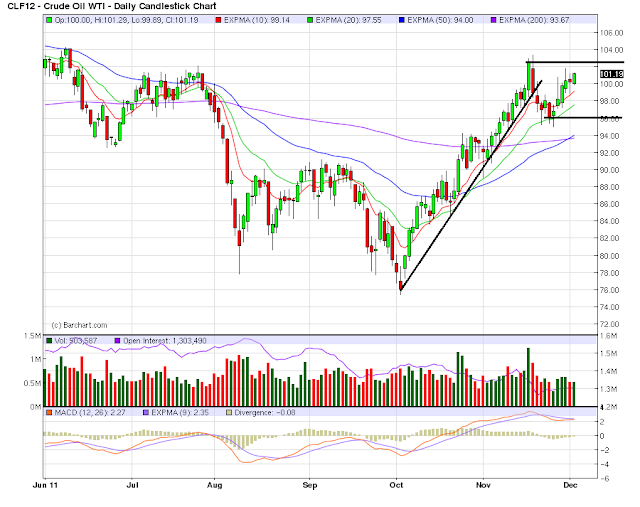 After breaking a strong upward trend, oil prices are now consolidating between the 96 and roughly 102.5 price level.  However, the overall trend is still strong -- all the EMAs are moving higher, prices are above the EMAs and the MACD is about to give a buy signal.  Fundamentally, we're not in the summer driving season and there is continued talk of an economic slowdown (some economists are now stating Europe is already in a recession).  That being the case, it's hard to see a strong rally emerging should prices move through the 102 area.

The longer (IEF) and long (TLT) end of the Treasury curve also appear to be consolidating.