This week, I'm still left with the feeling that traders are sensitive to the overall price of gas. In addition, consider the fact that the oil market has not advanced due to the ongoing problems in the Middle East. And, we're starting to get word of decreased gasoline demand and a possible slowing economy in Q1.

While my feeling is not scientific, I'm still of the opinion there is not much upside room in the oil market, given gas' current price.

Let's take a look at the chart to see what it tells us: 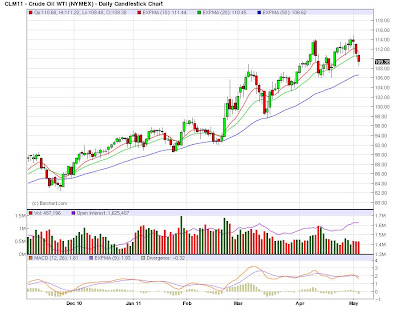 Prices have hit strong resistance at the 114 price level. First, notice that as prices rallied to that level from the middle of April, they printed some very weak bars. When prices hit the 112 level, they printed several spinning tops and candles with weak bodies. Also of interest is the MACD which printed some very weak readings. While the EMA picture was strong, there was also the fundamental picture; gas is approaching $4/gallon, which is clearly having an impact on consumer behavior.

As such, we see that prices have again retreated from the 114 level, printing some strong downward bars. Let me add that I do not expect prices to crash; there is still very strong upward pressure from simple supply and demand. World oil supplies are tight, demand -- although weakening -- is still strong, the Middle East is still a tinderbox and we're entering the summer driving season in the US. Those facts provide strong support for prices.

In short, I don't see the market moving strongly in either direction. As prices approach the 114 level, I see them hitting resistance, especially as news of gas prices gets publicity. However, there are strong supports for the market as well.

Basically, I think we're in for a fairly tight trading range near term.
Posted by Unknown at 4:55:00 PM