I want to continue with a look at the Great Depression from another angle, which is the percent the annual BEA data in a "contributions to percent change in GDP" format. This allows us to see what areas of the economy contributed to growth during a particular year. 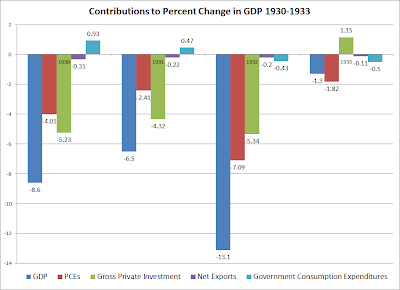 The years 1930-1933 show a clear and devastating economic contraction. GDP dropped by 8.6%, 6.5% and 11.1% in the years 1930-1932 and a milder 1.3% in 1933. Most importantly, notice that literally all sectors of the economy are responsible for this contraction; PCEs and gross private domestic investment all decreased at sharp rates in 1930-1932. However, notice that government spending did little to stave off the decline; while it contributed to overall growth (that is it printed a positive number in the above chart) it did not add much. But while government spending did increase 10.2% in 1930, it only increased 4.2% in 1931 and contracted in both 1932 and 1933 (dropping 3.3% in both years from their previous years levels). As such, the lack of a contribution was the result of an unsustained fiscal stimulus effort. 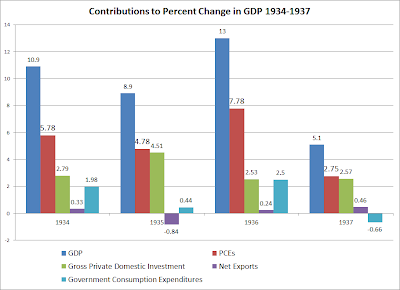 The years 1934-1937 show a very different economy -- one of very strong growth. For the years 1934-1937, GDP grew 10.9%, 8.9%, 13% and 5.1% respectively -- all very healthy rates of growth. Most importantly, notice the increase was primarily the result of private sector factors with both PCEs and gross private investment adding to growth. Government spending did help, but this was hardly the public sector takeover many claim existed. However, also note that government spending did increase in these years (increasing 12.8%, 2.7% and 16.7% for the years 1934-1936, respectively) helping to add to economic growth (remember the GDP equation of C+I+X+G). 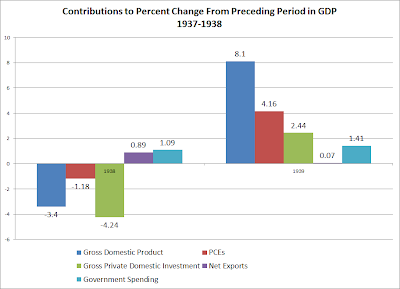 1937 brought a recession to the economy, which led to another contract. Notice that -- once again -- this led to a drop in PCEs and investment. However, by 1938 growth had returned.
Posted by Unknown at 11:30:00 AM