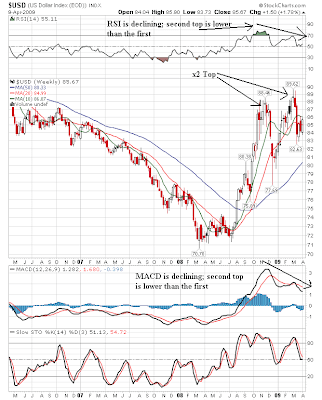 The weekly chart shows the dollar formed a double top over the last few months. This is confirmed from the RSI and MACD forming lower tops. Now prices are consolidating near/around the 10 and 20 week SMA. The longer term trend represented by the 50 week SMA is still moving up. But the 10 and 20 week SMA are meandering a bit. They are still higher, but with less strong trends. 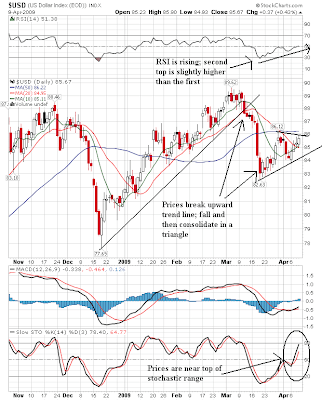 The daily chart is very interesting. First, we can see the price drops from the upward sloping trendline that started in mid-December. But prices are now consolidating in a triangle pattern. In addition, prices and the SMAs are in a tight bunch, indicating traders don't know where to send prices next. The MACD is neatral. The RSI is rising but weakly while the stochastics are at the top of their range indicating prices would retreat.
Posted by Unknown at 6:42:00 AM