There is no economic data today due to the Columbus Day observance.

So let me drop this graph of a metric I have been trying to find, of college educational attainment by age demographic, that I finally came across a couple of days ago: 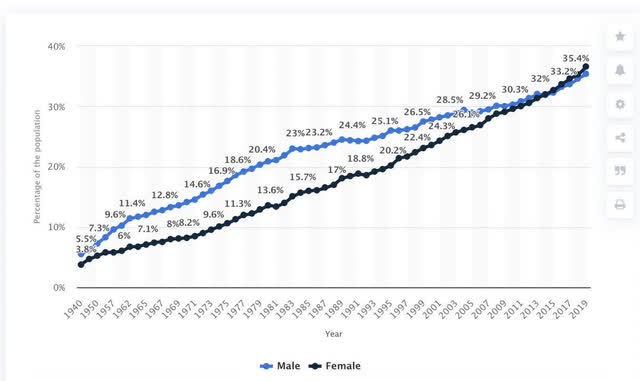 It is a commonplace that among Whites at least, support for Democrats is highly correlated by college education. What is unclear is whether that is actually a function of education itself, or is simply confounded by age group.
The above graph shows are steady rise in the percentage of both men and women with college degrees over the past 80 years. But we know that the strongest support for the GOP, and for Trump in particular, is in the age cohort of younger Boomers and the first half of Gen X, roughly birth years 1960-1970. That equates with college degrees being granted about 20 years later, from 1980 to 1990 or so.
Yet there is no notable exception in the growth of the percent of college educated persons during the 1980s. That strongly suggests that it was the condition of the economy in particular during the 1970s and 1980s that led to such strong GOP identification among that age group, rather than their educational attainment.
I still haven’t found any good information that provides cross-tabs on both educational attainment and age group, to more specifically sort out the strongest correlation. So for now, this will have to do.
Posted by New Deal democrat at 8:25:00 AM