Now that the Case Shiller indexes have been reported for May, let's take an updated look at house prices.

The below graph compares average hourly earnings for all workers (including managers)(red) with the Case Shiller 20 city index, and the FHFA's purchase only nationwide index:

Because the series is so volatile, I am showing the median price for new homes separately compared with wages, below:

The pattern here is the same: prices have continuously increased faster than wages. 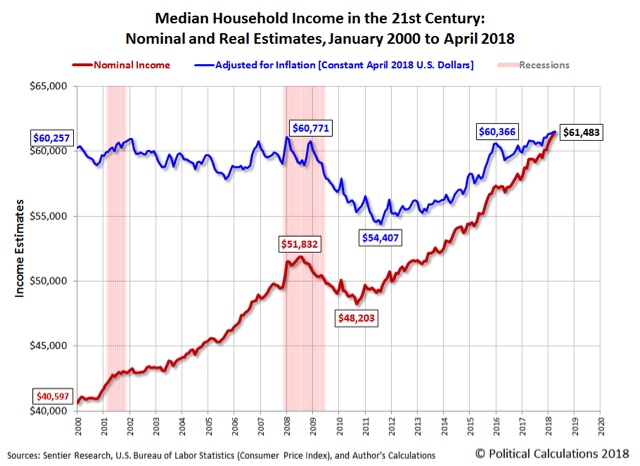 This is almost certainly a better metric than wages, because after all, it is a household that purchases a house! Even so, household income is still lagging house price increases.

The bottom line is, even taking out the affect of higher mortgage rates, the price of housing continues to rise faster than the incomes of potential buyers.  There is some evidence, from the decline in the last three months of permit issuance for single family homes, and the deceleration this year in the growth of purchase mortgage applications, that lack of affordability is making a dent in home sales,  but as I pointed out yesterday, that hasn't shown up in the (very volatile, and heavily revised) report of new home sales.
Posted by New Deal democrat at 8:27:00 AM