Can wage growth save the housing market from the effects of Fed rate hikes?

A couple of weeks ago, Prof. Tim Duy of Fed Watch wrote that:


The Fed ... do[es] not want mortgage rates in particular to climb ahead of the economy. The memories of the taper tantrum - and the subsequent stumble in the housing market - still sting. This time around, however, higher rates are being driven not by a shift in the expected Federal Reserve reaction function, but instead by an improved economic outlook. If housing markets can handle the higher rates (note the return of the first-time buyer), and there is reason to believe they will if wage growth continues to accelerate, then the Fed will feel more confident that they are getting across a message consistent with the evolution of activity. And they will thus be more willing to begin the normalization process in 2015 as they currently anticipate.

Is the assertion that the "housing markets can handle the higher [mortgage] rates ... if wage growth continues to accelerate" correct?

Historically, in terms of the economic cycle, housing is a long leading indicator. Nominal wage growth, at least, is a long lagging indicator (lagging behind even the unemployment rate).  Much as I respect Prof. Duy, the historical record contradicts the assertion that higher wage growth leads to better housing markets. If anything, it is the reverse that is true. 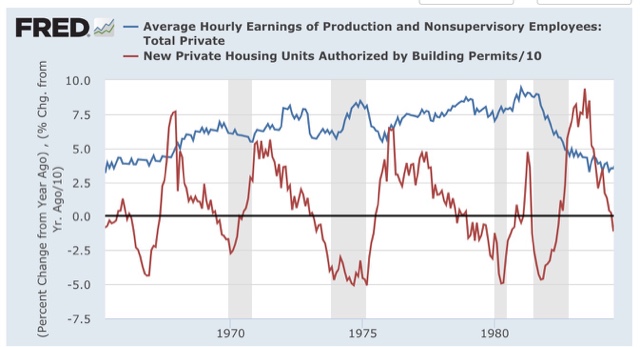 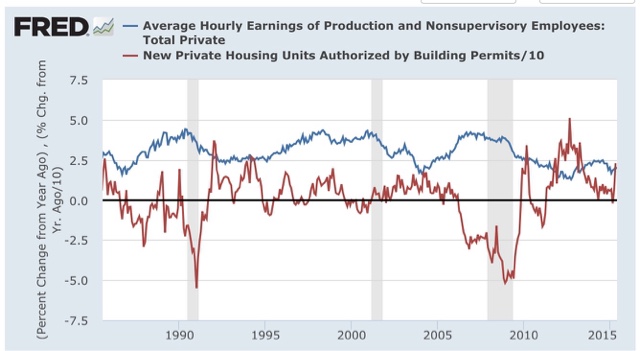 Note that, if anything, and increase in nominal wage growth typically has coincided with a *decline* in housing permits!
But what about real, inflation-adjusted wage growth?  The record is more mixed: 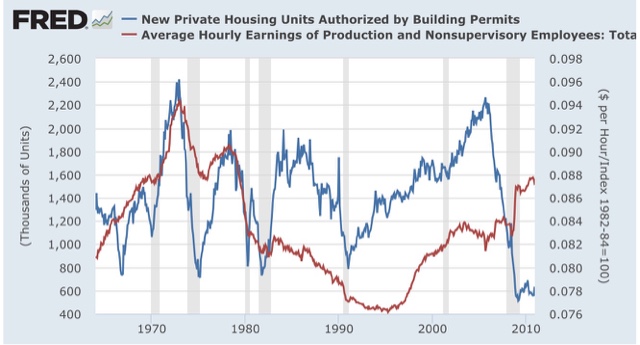 While there is a superficial coincident relationship, a closer examination reveals that real wages rose all through the late 1960s into the early 1970s, despite several downturns in housing permits. The reverse - declining real wages with several housing booms - is true from 1974 into the mid 1990s. Finally, from 1998 to the present, permits and real wages have generally moved inversely!
While unfortunately there is no good way to compare real household income (which is only measured once every 3 years, officially) with permits, we can measure real aggregate wage growth (which I think is the best measure of an employment recovery).  Here are permits (red) with real aggregate wages from 1965-85: 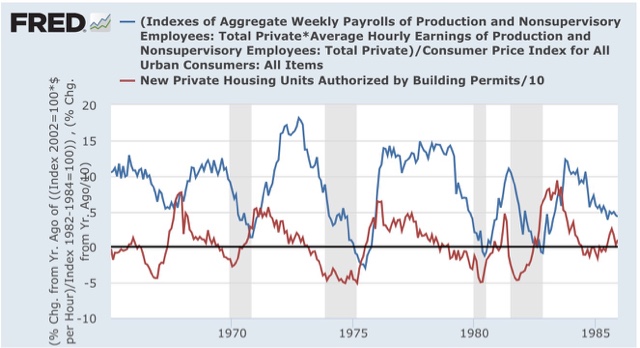 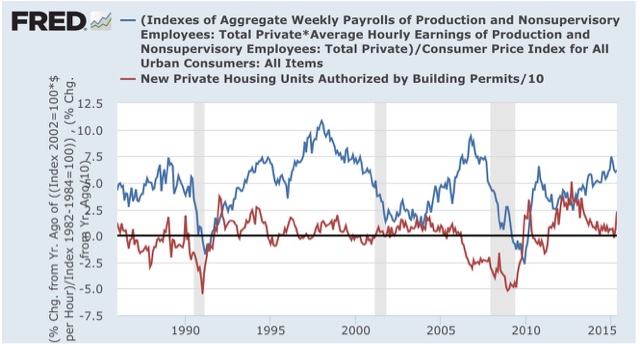 With the exception of the housing boom and bubble period of 1995-2005, where the data is more noisy, i.e., 1965-94 and 2006-present, where the data is noisy, the leading relationship of housing to real aggregate wages is clear.
So, with all respect to Prof. Duy, and to whomever may have similar opinions at the Fed, the record does not appear to support the notion that wage growth will maintain growth in housing even if the Fed is raising interest rates.
Posted by New Deal democrat at 10:00:00 AM