Ayn Rand Is Full of Crap

Over at Angry Bear, Rdan notes that another blogger has a video clip from the upcoming Atlas Shrugs movie, which they supposedly have to do in three parts because it's so long. We also have factually challenged Donald Luskin calling his blog "I Am John Galt."

I've read the Fountainhead and Anthem (because I was a fan of Rush's 2112) some time ago. First, I thought the Fountainhead could have been about 800 pages shorter, although I'm sure an English major could tell why all the bits and pieces needed to be in there. The word "verbose" comes to mind.

But more importantly, Rand wrote fiction. She uses allegories to explain her philosophy. Very long allegories. But it's an idealized world that has no bearing on reality (much like the models on which most modern economic theories are based).

How do I know this? Simple.

Here is a graph of real US GDP for the same period: 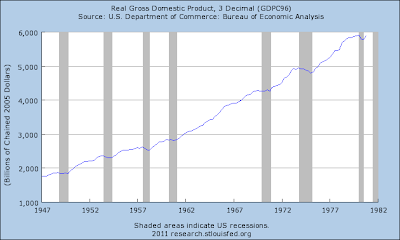 There was no "Going Galt." The economy still grew. In fact 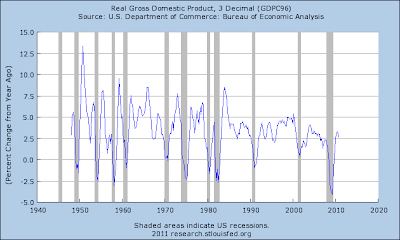 As the above chart of the YOY percentage change in GDP shows, the economy was more prone to grow at faster rates in the "going Galt" days of massively high taxation.

BTW: This is not an endorsement of 90% top marginal tax rates. Or 80% However, I have continued to argue for some time that top marginal rates do need to be higher than current levels only because the budget gap is so large. And no, that will not kill the economy or lead to people fleeing the U.S. in droves. But that's for another day.

But, the argument that people will "go Galt" when rates increase is, well, bullshit.

This moment of clarity was brought to you from the world of objective facts and figures, not the idealized world of Ayn Rand.
Posted by Unknown at 2:30:00 PM