Source” COVID Tracking Project
*Because many asymptomatic cases in particular have probably not been diagnosed, I suspect the truer number is on the order of 25 million, or 1 in every 13 Americans.
Here is the latest overall look at new infections and deaths countrywide (note separate scales): 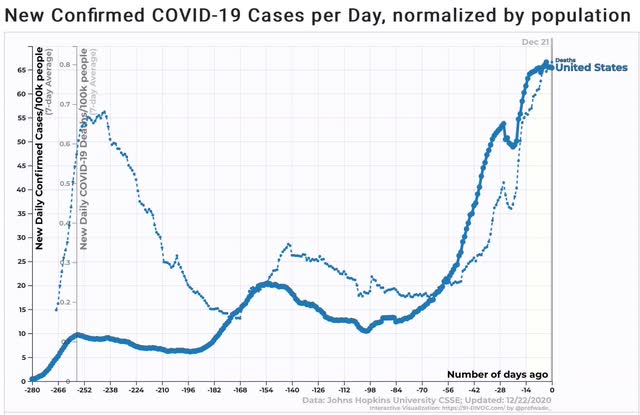 Each wave of new infections has been bigger than the one preceding, but deaths only in the past month have risen on a per capita basis to and exceeding the early peak from March and April. In the past 2 weeks, the rate of new infections has stabilized. We can expect deaths to stabilize in the next week or two at the level of one 9/11 each and every day.
Unfortunately, there is a behavioral feedback loop bordered by complacency and panic. The former means that voluntary measures alone will never defeat the pandemic. The latter has meant that patent and visible danger leads to a period of serious scaling back of risky activities by the majority of individuals.
Given the recent huge surge in cases, is there still a “pain threshold?” I think so, and it probably has been triggered most cogently by news reports of hospital ICU’s that are already at full capacity and most turn away patients, accompanied by a continuing rise in deaths.
In the below graphs, I break out new infections, hospitalizations, and deaths by those States which at various times have been the “poster children” for out of control outbreaks: NY and NJ in March and April, AZ and FL during the summer, ND and SD about a month ago, and TN, AL, and MT now.
New infections: 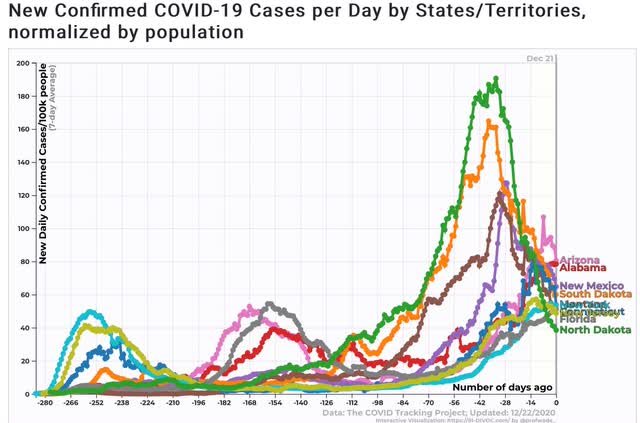 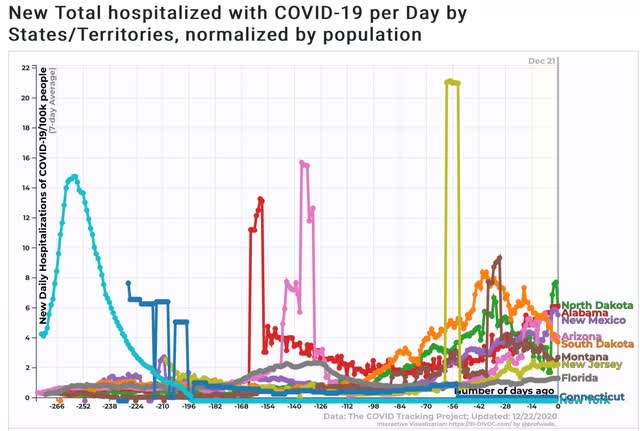 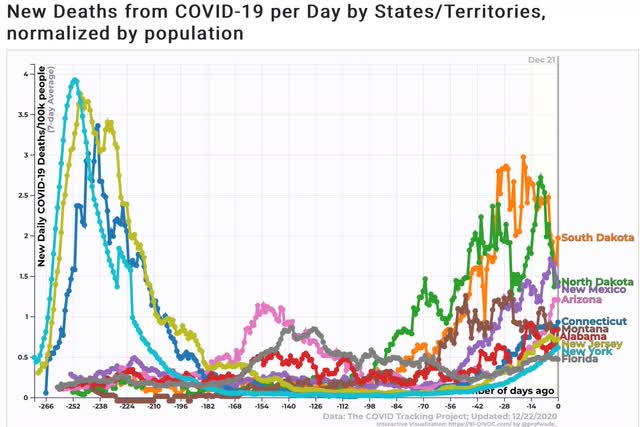 Obviously there is no set threshold for when infections start to change behavior. No doubt part of this is the differing demographics of the successive waves of infection, as well as improvements to medical treatment.
There does seem to be a “pain threshold” for deaths at roughly the level of 2.5 deaths per 100,000 population daily, but note that in summer public behavior changed in AZ and FL well below that level.
The rate of hospitalizations seems to correlate most closely with a “pain threshold.” At the level of 4 to 8 hospitalizations per 100,000 population, there is a palpable change in the public’s behavior.
Because the large majority of infections do not lead to hospitalizations, it is likely that the level of infections itself does not sufficiently alarm the public so as to change their behavior. But once serious, life-threatening cases become noticeable enough, as indicated by the level of hospitalizations, and additionally by a big rise in reported deaths, people’s behavior begins to change. That even North and South Dakotans changed their behavior once the situation became dire enough seems like the best proof for the existence of such a “pain threshold.”
The newest “poster children” are Tennessee and, alas, California (shown with North Dakota for comparison): 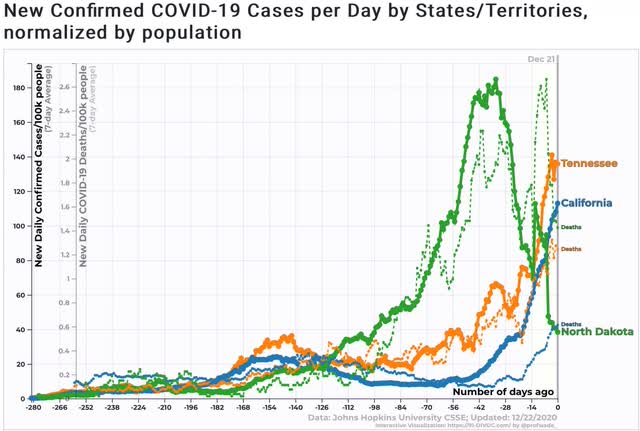 Based on the above, they are probably a week or two away from hitting their “pain thresholds.”
Posted by New Deal democrat at 11:55:00 AM