Let me begin with a reminder that polls are really only nowcasts, not forecasts. There is nothing inherent in their current lean which tells you they will remain in the same category in early November. Which is why I take issue somewhat with the following tweets by forecaster Harry Enten: 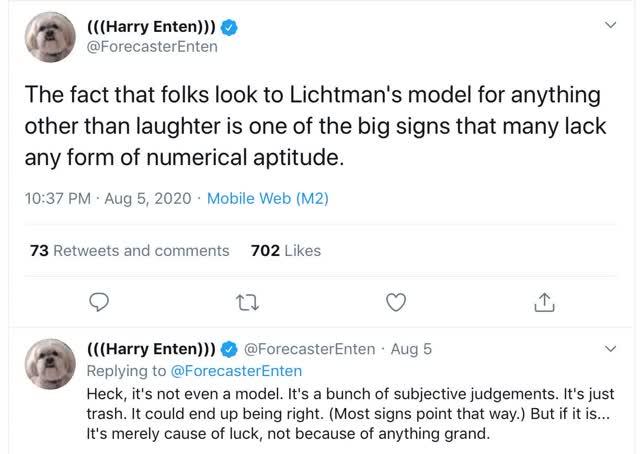 This past week Prof. Allan Lichtman, who predicted Trump would win in 2016, predicted that Biden will win the election this year, based on his 13 “keys.”

Lichtman said that 7 of the 13 keys favor Biden:
1. The Democrats won more seats in the 2018 midterms than they held after the 2014 midterms.
2. The economy is in recession.
3. Per capita real income growth has been lower in Trump’s presidency than during Obama’s.
4. There has been significant social unrest.
5. Trump has been tainted by major scandals.
6. Trump has not had any major military or foreign policy successes.
7. Trump lacks charisma.

Enten is correct that at least some of Lichtman’s ratings are subjective (e.g., on what basis does he decide whether or not Trump or Biden have charisma, or whether Trump has had significant foreign policy successes or failures? These aren’t quantified; they are inherently subjective). But properly speaking his 13 keys are a “diffusion model,” just like, e.g., the well-respected ISM manufacturing new orders index which has been a good economic leading indicator for over half a century.

Does it have shortcomings? Of course. But the first 3 “keys” favoring Biden are objectively quantifiable, and 2 of the remaining 4 (social unrest and scandals) are pretty clear. Number 6 looks correct as well.

In any event, the point is that polls DO NOT FORECAST; only fundamentals-based systems can do that - and even then are subject to the problem that decision makers and voters will react to the forecasts.

With that said, let’s turn to this week’s numbers.

Last week I noted that Trump’s approval was reverting to the mean, as were the Presidential polls. The former trend is continuing; the latter is not. 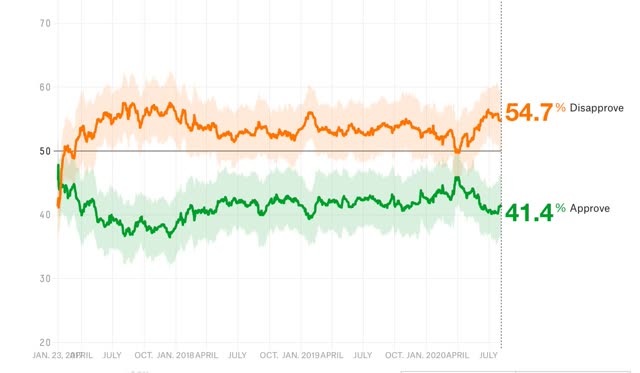 After languishing at 40%, equivalent to the worst levels of his Presidency, Trump’s  partisans have come back to approving him, as they always have for the past four years.

But this has not been reflected in the Presidential polling updated through this week. To refresh, here is how the below map  works:

Here is the updated map through August 8: 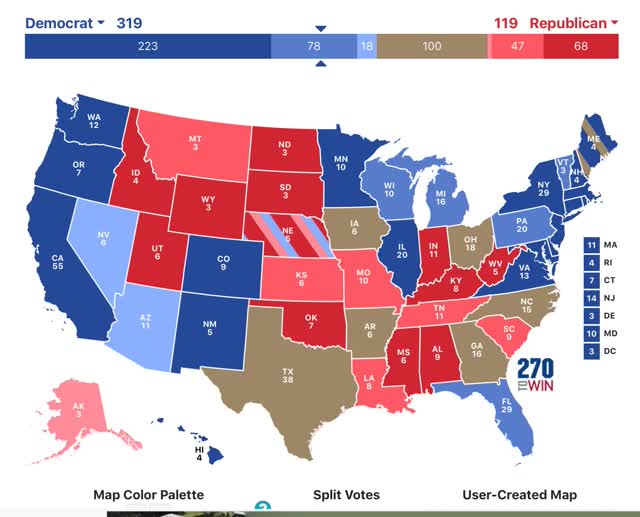 The only significant improvement for Trump is in Maine’s 2nd Congressional district, which goes from “lean Biden” to toss-up. Several deep red “solid Trump” States, notably Montana and  Kansas, have lightened to “likely Trump.” More notably, Iowa has moved back to toss-up from “lean Trump,” and maybe more importantly, despite heavy polling, Georgia, North Carolina, Ohio, and even Texas remain in the toss-up category - and Florida remains firmly in the “lean Biden” category.

As it has indicated for the past month, per the current map Biden just has to win the “solid” and “likely” States, and need not win any of the “lean Biden” States, in order to win the election.

I continue to be of the opinion that Trump has 4 weeks left - until Labor Day - to work a miracle with the coronavirus pandemic. If it is about where it is now, then the economic fundamentals + the casualties from the pandemic indicate that Biden will win the popular vote in November, although the race seems likely to tighten somewhat, because the short leading economic indicators have been suggesting the economy will improve somewhat.
Posted by New Deal democrat at 9:40:00 AM