It's time to admit that house prices have stopped falling

How long do you suppose until any of the mainstream media picks up on the fact that housing prices have, in fact, NOT been declining for the last half year? Now, I realize everyone "knows" that house prices are declining. Unfortunately reality since the beginning of this year has not been conforming to what everyone "knows."

Housing Tracker's final report of asking prices in 54 metropolitan areas for September is in, and it shows that the YoY rate of declines continues to lessen, now only -1.7% YoY. Here's the updated chart:

If this rate of second derivative improvement continues, we could see a YoY increase in asking prices nationwide before the end of the year. If so, that would mean the nominal bottom in housing prices has already occurred -- perhaps last January (because of the strong seasonality in housing prices)!

Note that Housing Tracker is current through last week, vs. yesterday's Case-Shiller report, which is an average of May, June, and July.

As to which, here's a graph of the seasonally adjusted Case-Shiller 20 city index since its inception: 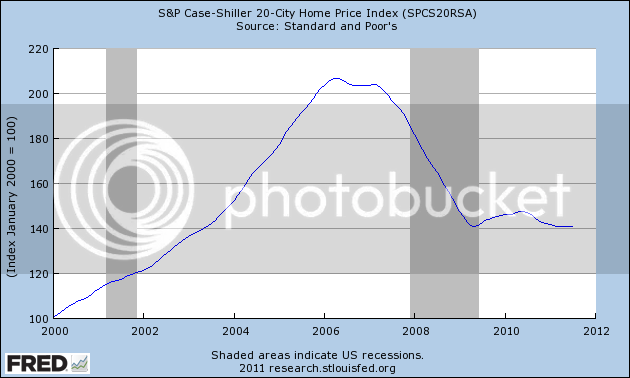 Since the data in the graph above is seasonally adjusted, unlike Housing Tracker, we don't have to wait for YoY changes to make valid statements about the data. So here is the data for the 20 city index shown above for the last 7 months:

The variation in the index over the last 7 months is less than 1%, and on a seasonally adjusted basis we have not made a new low in 4 months. In fact we are above the low this index made in May 2009 (before most of the $8000 housing credit distortions kicked in).

In short, both Housing Tracker and Case-Shiller support the view that a bottom in house prices was probably made early this year.

I do expect "real" as opposed to nominal prices to continue to decline, but this decline will be due primarily to inflation, not declines in actual prices.

A rejoinder can and has been made that increased foreclosure activity will cause this bottom to be temporary. That could be, but as to that, here are a few important points: (1) we need to start with the truth, which is that house prices have basically stopped falling this year, and proceed to estimate the impact of renewed foreclosures from there; (2) the effect of foreclosures ought to be measured in terms of supply, as in, "An X increase in supply due to foreclosures will result in a Y reduction of price compared with otherwise." Bloviations are not hard data; and (3) how many foreclosures will hit the market over what period of time? A sharp temporary increase followed by a long minor increase will presumably have a markedly different impact than a steady and substantial but reduced stream. Note that an increase in foreclosures might simply mean a longer flat period of nominal prices, rather than a renewed actual decline.

But let's start with the truth: in 2011 house prices have stopped declining.

-----
UPDATE: Professor Shiller and I are not really in disagreement. Here's the relevant part of his take on yesterday's report:

In February, Professor Shiller startled those looking for an imminent "bottom" in house prices by suggesting that house prices could still fall 10% to 25%. He's standing by that assessment.

And yes, the comments are Business Insider are unintentionally funny. If widgets sold for $100 a year ago, and are $98.30 now, but were $90 in March, then they already made their bottom. This is the caution I always make about YoY data.
Posted by New Deal democrat at 11:30:00 AM